Need a high-speed internet plan for streaming, gaming and more on multiple devices? Discover what is considered the fastest internet, as well as which providers and plans are available near you.

Enter your address to view internet providers available near you

These days, just about every provider claims to have the fastest internet in the world, with terms like “gigabit” and “high speed” thrown around at will. The truth is, most people who have access to a cable or fiber optic internet plan will be able to get all the speed they need without going near the top plans. For context, 1,000 Mbps is enough to stream Netflix in 4K on 40 TVs at the same time.

Fiber optic internet is almost always the fastest option, but if it’s not available in your area, cable internet can also reach gig speeds. DSL and satellite internet rarely reach speeds that could be considered “high speed,” but fixed wireless 5G service is quickly becoming another option for fast internet.

Fortunately, just about every major cable or fiber optic internet provider has a gig plan available in most of their service areas. Not all providers and plans listed below are available in all areas.

Kinetic by Windstream: Most speed tiers

*Pricing per month plus taxes for length of contract. Additional fees and terms may apply. Pricing varies by location and availability. All prices subject to change at any time. May or may not be available based on service address. Speeds may vary. As of 03/16/22.
**Rate requires paperless billing. Additional taxes, fees, and surcharges apply. Speed may not be available in your area. Maximum download/upload speed of up to 940 Mbps via a wired connection.

To find the best high speed internet providers, we focused on four categories: affordability, performance, value and customer satisfaction. We gave the most weight to performance, which includes both download and upload speeds. Download speeds are what matter for most internet activities — streaming, browsing social media, downloading files — but upload speeds are also essential for things like Zoom meetings and online gaming.

We gave the most weight to performance, which includes both download and upload speeds. Download speeds are what matter for most internet activities — streaming, browsing social media, downloading files — but upload speeds are also essential for things like Zoom meetings and online gaming.

Each category also contains multiple sub-factors, all of which are weighted differently to impact the provider’s overall score. For each sub-factor, we score all providers on a continuous scale of 1 to 5, relative to the industry as a whole. Because the average download speed in America is currently 180 Mbps, for example, we assigned all plans with download speeds between 100 and 299 Mbps a score between 3 and 4. Xfinity’s 200 Mbps plan received a 3.50 score for download speed, while Spectrum’s 400 Mbps plan got a 4.16.

If you can get AT&T Fiber in your area, it offers the best high-speed internet plans of any nationwide provider. Plans start at just $55/mo. for 300 Mbps of upload and download speeds — plenty for all but the most connected households. And if you need more bandwidth, AT&T Fiber has speeds all the way up to 940 Mbps.

Verizon Fios is another great option for high-speed internet, scoring just slightly below AT&T in our evaluation. Its prices are slightly lower — $39.99/mo. for 200 Mbps compared to AT&T’s $55/mo. for 300 Mbps. Verizon Fios also has the highest customer satisfaction scores of any internet provider from J.D. Power.

Google Fiber is one of the newer internet providers on the block, but it’s already one of the best around. It only has two plans available — 1 Gbps speeds and 2 Gbps — but they’re both excellent values starting at just $70/mo.

CenturyLink’s fiber optic service is one of the best high speed internet options around, but it stands out in one specific area: It doesn’t come with any extra fees on its gig plan. That means equipment (usually $10 to $15/mo.) and installation are both included at no extra cost.

If you want high speed internet at the lowest price around, it’s hard to beat WOW! Internet. Plans start at just $19.99/mo. for 100 Mbps, which is one of the most affordable rates in the country. Prices increase by $10 to $20 in the second year, but even with that factored in, WOW! is still cheaper than most other providers.

Kinetic by Windstream: Most speed tiers

If you’re looking for options, Kinetic by Windstream has you covered with four different tiers of fiber optic internet to choose from, ranging from 200 to 1000 Mbps. It’s also one of the more affordable high speed internet providers, with plans starting at just $37/mo.

We think the five providers listed above are the best options for high-speed internet, but they’re far from the only game in town. If you don’t have access to these providers in your area, these are some other plans to consider.

Cox is the third-largest cable provider in the country, with service throughout Arizona, California and Virginia. Its plans start fairly low, but they come with hefty price increases in the second year — anywhere from $20 to $36 depending on the plan. Unlike most high-speed internet providers, Cox plans also have a monthly data cap of 1.28TB.

Frontier offers both fiber optic and DSL internet service. Its fiber optic service, while not as widely available, provides superb speeds for a reasonable price. We like the 500 Mbps plan the best and you won’t have to worry about data caps or equipment fees. If you can only get Frontier’s DSL service in your area, you’re probably better off searching out a cable provider.

One of the most widely available internet providers in the country, Spectrum offers speeds as fast as anyone, but you’ll pay a little more for them. Its gig plan pricing is comparable to other providers, but it does increase in year two.

If you’re looking for the very fastest speeds, Xfinity goes all the way up to 2,000 Mbps in some areas. For most households, Xfinity’s 200 Mbps plan is an affordable choice. Because it’s a cable provider, Xfinity’s upload speeds aren’t as fast as fiber optic plans. You’ll also have to deal with a 1.23TB data cap with Xfinity plans.

Optimum offers both fiber optic and cable internet plans throughout the country, and both options get you all the speed you’re likely to need. Unfortunately, Optimum comes with some outrageous price increases. After the first year, your bill will go up.

Regional fiber optic or cable providers such as RCN offer internet plans with max speeds comparable to what you’ll find from the top national providers.

In some cases, regional providers can be the faster internet option. For example, EPB, a local Chattanooga, TN, fiber optic provider, has a 10 Gbps plan for around the same price as Xfinity’s 2 Gbps plan.

For times when your speeds are consistently much slower than your plan’s advertised speeds, consider resetting your modem and router. Also, be sure to check for any unwanted devices on your connection that may be hogging your bandwidth. Wireless internet is also inherently slower than wired, or Ethernet, connections, so don’t be alarmed if your wireless speeds are 50% or less than your plan’s advertised speeds.

Here are some more troubleshooting steps you can take to help boost your Wi-Fi signal:

The most recent official data on a provider’s actual tested speed vs. their advertised speed comes from a 2021 FCC report detailed in their Measuring Broadband in America – Eleventh Report.

According to the report, 9 of 12 ISPs performed at or better than their advertised speed during the peak hour. “For most of the major broadband providers that were tested, measured download speeds were 100% or better than advertised speeds during the peak hours (7 p.m. to 11 p.m. local time).” Those providers include Frontier (DSL & Fiber), Windstream, Charter, Comcast, Cox, Mediacom, Optimum and Verizon.

Allconnect: Let us compare high speed internet providers for you 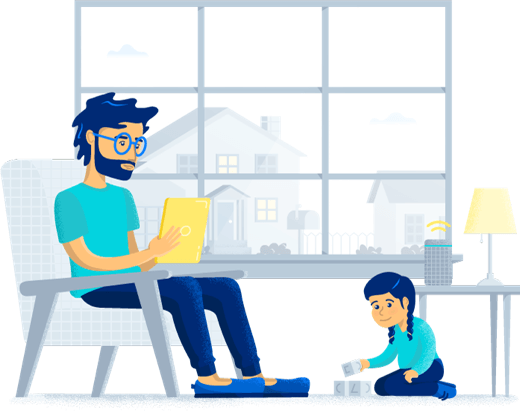 What is considered “fast” internet?

What is the fastest internet speed in the world?

A new record for the fastest internet in the world was recently set at 319 Terabits (or 319,000,000 Megabits) per second. As you can imagine, these speeds were recorded by a team of engineers and aren’t achievable at the residential level. On a more realistic speed level, speedtest.net reports that as of August, 2021, Singapore has the fastest mean download speeds at 262 Mbps. In comparison, the United States ranked 12th with a mean download speed of 199 Mbps.

What is broadband internet speed?

In their 2015 Broadband Progress Report, the FCC updated the threshold for an internet connection to be considered broadband to 25 Mbps download and 3 Mbps upload. The way we use the internet has changed significantly since then, so while 25 Mbps is still technically broadband internet, we wouldn’t consider it to be “fast” anymore.

Who has the fastest internet?

The fastest internet speed in the US is 2,000 Mbps and is offered by both Xfinity and Google Fiber. Xfinity is more widely available for the average US consumer. Verizon FiOS also averages the fastest tested speeds for Q1 of 2021, coming in at 160 Mbps for upload speeds (data taken from Speedtest.net)

What is good internet speed?