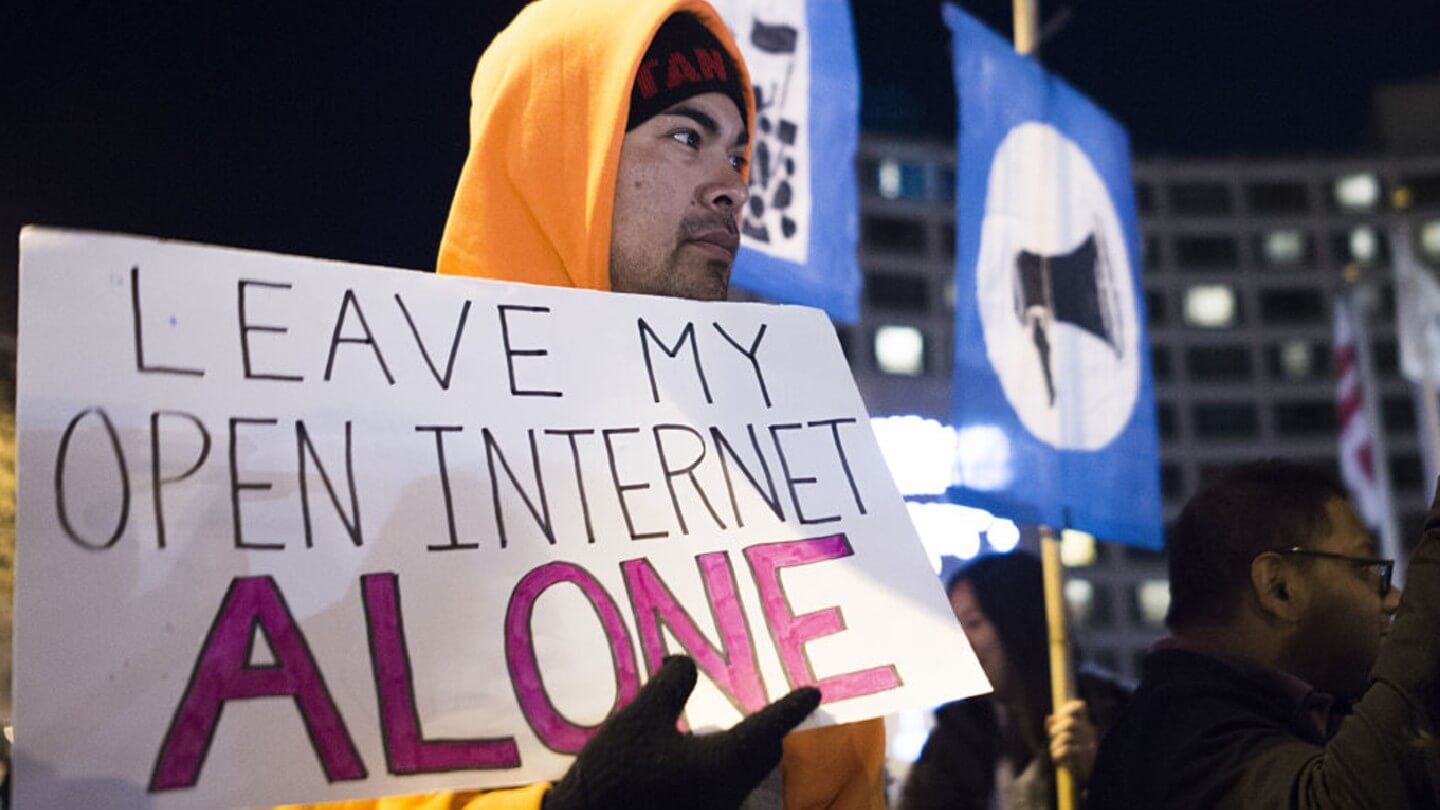 Net neutrality is more than just a phrase thrown around by politicians and broadband companies — it’s a battle for the future of internet use. The status of net neutrality laws in the U.S. has ping-ponged with each new president in recent years. In 2017, the Trump administration’s Federal Communications Commission (FCC) repealed sweeping net neutrality rules passed just two years before; in July 2021, President Biden signed an executive order to restore them.

Without net neutrality or other laws protecting equal content, ISPs could, in theory, block certain websites and favor others. For example, your internet provider could theoretically make Netflix slower in order to push you towards its cable TV service.

Or, Xfinity could allow their subscribers to stream Peacock content (which they own through NBCUniversal) for free, while charging subscribers for watching Netflix. With net neutrality, you would have free and equal access to both Peacock and Netflix.

Another example would be your ISP slowing your connection every time you try to game over Twitch, but speeding it back up again when you’re not gaming, a practice known as throttling.

The history of net neutrality

In 2003, Columbia University law professor Tim Wu first used the phrase “network neutrality” in a paper about broadband discrimination. At the time, Wu hoped to provide a “general perspective” on net neutrality stating that: “Government regulation in such contexts invariably tries to help ensure that the short-term interests of the owner do not prevent the best products or applications becoming available to end-users.”

The idea caught on quickly. Both the Bush and Obama administrations enacted anti-discrimination rules aimed at protecting net neutrality, but it wasn’t until 2015 that the FCC passed its sweeping net neutrality order.

But it turned out to be short-lived. Just two years later, the Trump administration’s FCC repealed those rules. Now, with an executive order issued on July 9, 2021, President Biden’s FCC is hoping to restore many of the same rules from 2015. Both sides continue to fight for their cause, with ISPs even resorting to paying for fake anti-net neutrality commentary.

Here’s a quick history lesson showing how the debate has evolved:

Just two years after sweeping net neutrality laws were adopted, they were repealed. Prior to being elected, President Trump only spoke about net neutrality in one 2014 tweet. However, shortly after his election, open-web advocates began to suspect that net neutrality would become a target for his administration.

Trump nominated FCC Chairman Ajit Pai (a long-time proponent for repealing net neutrality law) for a five-year term in January 2017. By the end of the year, the net neutrality laws from 2015 had been dismantled under what Pai has called a “plan to restore internet freedom.”

The FCC also emphasized that “heavy-handed” regulation prevented ISPs from adequately investing in the necessary infrastructure to improve rural broadband access and internet connections as a whole.

In his statement after the vote, Pai asked: “What is responsible for the phenomenal development of the Internet? It certainly wasn’t heavy-handed government regulation.”

“Simply put, by returning to the light-touch Title I framework, we are helping consumers and promoting competition. Broadband providers will have stronger incentives to build networks, especially in unserved areas, and to upgrade networks to gigabit speeds and 5G,” he said.

This means there will be more competition among broadband providers. It also means more ways that startups and tech giants alike can deliver applications and content to more users. In short, it’s a freer and more open internet.

A Court Appeals for the D.C. Circuit later upheld the decision to strike down net neutrality rules, citing a 2005 case called NCTA v. Brand X. The court also stated that the FCC can’t block states from putting their own net neutrality laws into place, which California, New Jersey, Oregon, Vermont and Washington have all done.

Six months after taking office, President Biden took his first step in restoring the net neutrality laws put in place by the Obama administration. The Executive Order on Promoting Competition in the American Economy covers a wide range of issues, with a focus on technology and agriculture.

In addition to bringing back the 2015 net neutrality rules, the order also urges the FCC to take other actions to promote competition among internet providers, including more transparent pricing. While it contains a number of bold proposals, right now, that’s all they are. Any rules the FCC enacts will almost certainly be met with lawsuits. We can expect to see this play out in the courts over the next several years — the fight for net neutrality is just one of many pushes for tougher internet laws.

President Biden’s executive order refers specifically to the Obama administration’s sweeping net neutrality rules, urging the FCC to enact “rules similar to those previously adopted” in 2015. That means no blocking, no throttling and no paid prioritization.

A big focus in the executive order has been to make broadband prices more transparent for customers. This comes in the form of a “Broadband Nutrition Label,” which aims to “give consumers clear, concise, and accurate information regarding provider prices and fees, performance, and network practices.”

In addition to keeping consumers informed about what they’re paying for, President Biden also wants internet providers to “regularly report broadband price and subscription rates” to the FCC “for the purpose of disseminating that information to the public in a useful manner.” The number of people who lack broadband access has been notoriously undercounted by the FCC in the past, so this measure would help the government get a more accurate picture of the digital divide.

Finally, the executive order states that landlords and internet providers should not be able to inhibit tenants’ choices among providers. If you live in a large apartment building, for example, you should still be able to choose from all the providers in your area.

According to the FCC, nearly 94.4% of Americans have access to broadband internet speeds (defined as 25 Mbps download and 3 Mbps upload) as of 2018, the latest year that numbers are available. This sounds great until you realize that it equates to nearly 20 million people who don’t have high-speed internet access.

The FCC has also admitted that its data-collection process for reporting internet access (and determining who gets funding to improve access) is flawed. Independent research by Microsoft reports that nearly half the country — a whopping 162 million people — lack high-speed internet access, a lack of connectivity now known as the “digital divide”.

While not contained in this executive order specifically, improving internet access is a big priority for this administration, with $65 billion devoted to the issue in the infrastructure bill moving through Congress.

What does net neutrality mean for you?

What net neutrality law means for you depends on how you view the need for government regulation of the internet. For some, the “light touch” that Pai mentioned allows for a competitive, capitalist market that will regulate itself naturally. For net neutrality advocates, though, it means the probability of less competition and higher prices.

What we do know is that a lack of net neutrality law means that ISPs are free to do pretty much anything and push the boundaries of what’s fair and just. For instance, some countries without net neutrality are already starting to see ISPs bucket their services and charge more.

We’re already starting to see the beginnings of this. Earlier this year, Cox introduced Cox Elite Gamer, which can help to “optimize the connection between your computer and the servers of a select number of games” — for an extra $15/mo. If you want less lag, less jitter and fewer ping spikes while gaming over Cox, it will cost you. Cox representatives have said this does not create a “fast lane” and they won’t reprioritize users.

What we also know is there is large and unwavering public support for net neutrality policy.

Immediately following the net neutrality repeal in 2017, a poll from the University of Maryland’s Program for Public Consultation found that 83% of Americans favored keeping the FCC net neutrality rules, including 75% of Republicans, 86% of Independents and 89% of Democrats.

This bipartisan support has stayed steady. A 2019 Comparitech survey found that 82% of Americans support net neutrality, and that, again, this support is consistent across party lines (86.9% of Democrats, 79.8% of Independents and 77% of Republicans support) and age demographics (83.2% of Millennials, 79.3% of Gen X and 82.4% of Baby Boomers support).

Thankfully, some providers like Starry Internet have given their public stances on net neutrality law to provide some clarity during the neverending legal fog.

“These are our clear Open Internet commitments to our customers:”

However, Starry is one of the few providers that has given an explicit statement on net neutrality. Providers like Spectrum, Optimum and Xfinity state that they also will not prioritize content, but some will cap your data to help with network congestion.

Be sure to look into your provider’s data cap and throttling rules before you sign a contract, or you may find yourself experiencing low-quality service with an otherwise perfectly good internet plan.