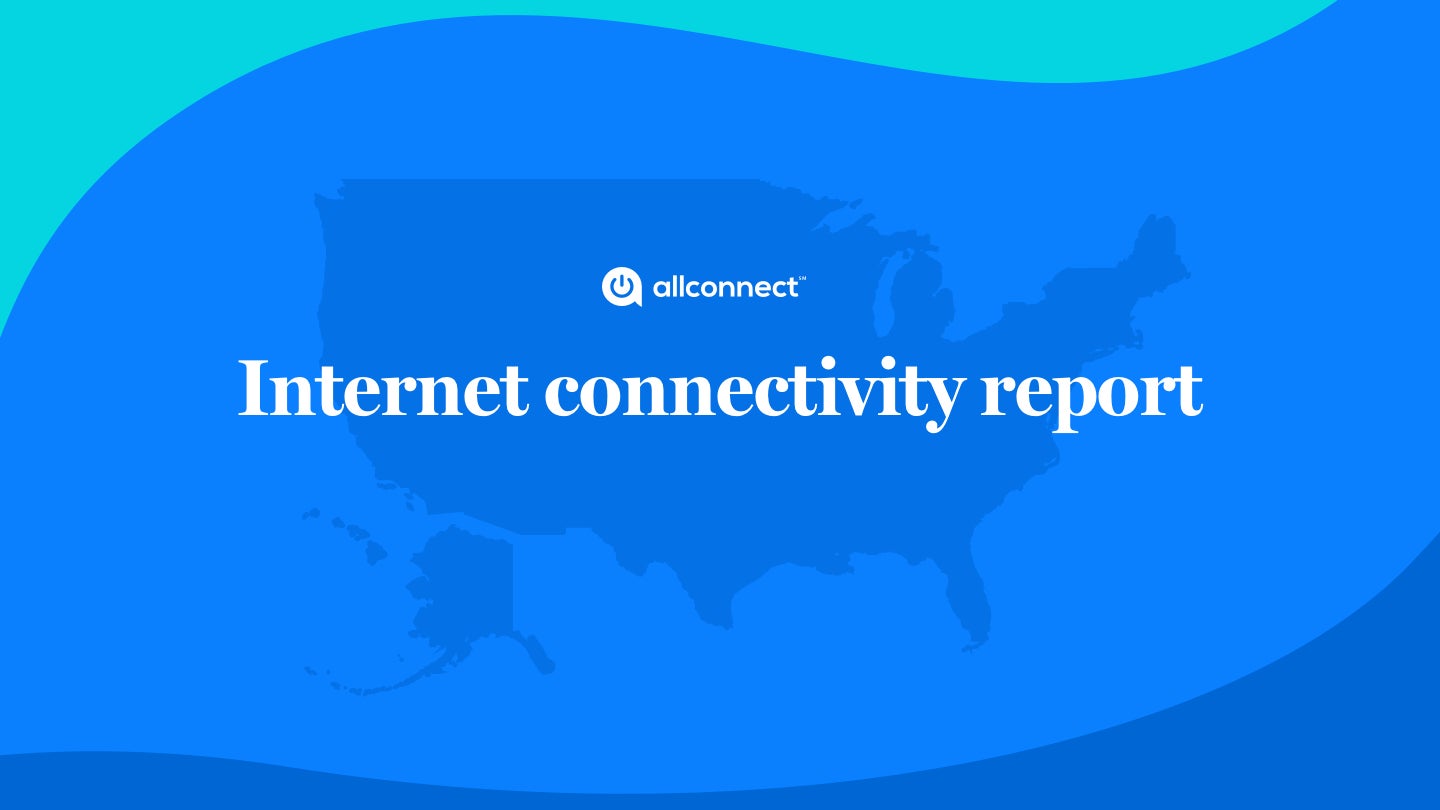 You might expect to find the best internet connectivity in the largest U.S. cities, but small and mid-sized towns actually came out ahead in Allconnect’s new data study. That’s not to say no big cities stood out — Chicago, San Antonio and Austin all ranked in our top 20 — but at the very top, it was places like Cedar Rapids and Des Moines that received the fastest internet, lowest prices and best coverage.

Although Americans have some of the fastest internet speeds in the world — 11th highest at 133 Mbps, according to Speedtest.net — that network isn’t deployed equally. Many rural areas pay high prices for slow speeds, while more densely populated cities enjoy an abundance of providers and plans to choose from.

To find the places with the best internet connectivity, we graded each location on four factors: the area that’s covered, the lowest price that’s available, the average internet speed that residents actually receive and the number of providers they can choose from. (Scroll down to the bottom for a full explanation of our methodology and data collection process.)

To jump straight to a specific section, click the links belows:

Unexpectedly, small towns in Pennsylvania and Alabama joined the Texas mega-cities of Austin and San Antonio for the Top 10 spots in connectivity.

Cedar Rapids, IA, the second largest city in the state, graded out with the highest internet connectivity score by a mile. In fact, the gap between Cedar Rapids and second place Des Moines is the same as the one from number two to 17.

Residents of Cedar Rapids are covered in 97% of the city, have 40 internet providers to choose from and receive an average of 89.97 Mbps download speeds. What’s more, prices start at just $42.50 on average.

Iowa’s most populous city earned the number two spot on our list. Residents get slightly slower speeds and fewer options than their neighbors in Cedar Rapids, with $42.50 average starting prices and 84.30 Mbps speeds. Much of Des Moines’ high average speed is due to CenturyLink’s fiber connection, which has a maximum download speed of 1,000 Mbps and is available to most of the city.

Pen Argyl, PA, has a population of just over 3.5K, but its residents enjoy some of the best internet connectivity in the country. The average maximum internet speed is an astounding 164.83 Mbps, and starting prices are some of the lowest in the state at only $35.99. But like many rural areas, Pen Argyl residents have only seven internet providers serving the area, so coverage is a little spottier than larger cities like Cedar Rapids and Des Moines.

The smallest town in our top 10, Elverson, PA, has just over 1K residents. Nevertheless, it has some of the fastest internet in the state, with average maximum download speeds of 217.18 Mbps — nearly twice the national average. Xfinity leads the way in the area, with speeds up to 400 Mbps and plans starting at just $30/mo.

A town of just over 2K people, Point Clear, AL, has long been a popular vacation spot for Southerners. Known for its refreshing breezes coming in from Mobile Bay, Point Clear’s Grand Hotel is known as the “Queen of Southern Resorts,” and served as a base of operations for military commanders in World War II. Today, visitors and residents alike receive average download speeds of 128.82 Mbps from six providers.

Just 40 miles across Mobile Bay, residents of Semmes, AL, receive the same great connectivity as their neighbors in Point Clear. AT&T and Xfinity service the majority of the area, with the latter offering speeds up to 150 Mbps.

The capital city of the Lone Star State, Austin has some of the fastest internet speeds in the entire country. Much of the city has access to a fiber-optic connection through AT&T or Google Fi, which brings speeds up to 1,000 Mbps. The city on average gets an astounding 239.83 Mbps, and has 22 providers covering the area.

A suburb of Allentown and just 40 miles north of Philadelphia, Coopersburg scored significantly higher in our analysis than its more populous neighbors. The borough is less than one square mile in total area, but residents have access to eight providers. The fastest options are cable connections from regional companies like Pencor Services, Inc. and Service Electric Cable TV, Inc.

San Antonio’s 1.5 million residents enjoy some of the fastest and cheapest internet in the country. Prices start at an average of just $35/mo., and speeds go all the way up 242.8 Mbps on average — the highest in our top 10. Fiber-optic connections from AT&T, Google Fiber and Guadalupe Valley Telephone Cooperative are available in around 30% of the city, with 23 providers in total covering the area.

The third town around Mobile Bay to make our top 10, Bay Minette, AL, has the same fast and inexpensive internet as Point Clear and Semmes. Famously, the town was featured in the movie Close Encounters of the Third Kind during its scenes at a railroad station. Today, residents get an average of 128.82 Mbps maximum download speeds, with plans starting at just $36.66/mo. on average.

Areas with the lowest connectivity scores

Ambler, AK, ranked dead last on our list. Accessible only by plane and snowmobile, the city has a population of just 262. Residents get around 1.5 Mbps download speeds on average, enough to check their email, but not much else. What’s more, they pay a premium for it. With only two providers to choose from, the lowest price available is $60/mo., and you can only get it in 62% of the area.

How much each state pays for its internet

How much each state pays varies greatly, but the average price per state is $0.42 for every 1 Mbps of download speed. Rhode Island gets the most bang for its buck at $0.24 per Mbps, followed closely by New Jersey at $0.25. On the other end, Nebraska and Montana pay the most for their internet speed at $1.30 per Mbps.

What are you really paying for internet?

Check your cost per Mbps here:

To check your current cost per Mbps (Megabits per second) , enter the download and upload speeds of your current internet service, then your monthly payment. We’ll use your information to calculate the price you’re currently paying per Mbps.

Or we’ll calculate it below.

According to your information, your cost is per Mbps. Compare your cost to state and national averages in the chart above.

Ready to try a different internet plan? Give us a call. We’ll find a plan that matches your needs.

Satellite internet is the only option in many areas

For vast sections of the country, cable and fiber internet are still unavailable. That leaves many users with only one way to get online: satellite internet. These towns are all in sparsely populated areas that don’t have enough customers for providers to justify the high cost of laying down cable.

Satellite is a decent alternative. Using geostationary (fixed position) satellites, providers can offer internet service virtually anywhere in the country, with speeds going all the way up to 100 Mbps. Alaska leads the way with 90 towns that only have access to satellite internet, followed by California with 65 and Oklahoma with 39.

Americans get some of the fastest internet speeds in the world on average, but how you experience that depends a lot on where you live. Larger and mid-sized cities generally fared the best in our analysis, with more choice, better coverage, lower prices and faster speeds overall.

Meanwhile, small towns in big states like Alaska and Arizona scored the worst on those metrics, and predominantly rural states like Nebraska and Montana paid a lot more for their speeds than their more urban counterparts.

For more information on our findings, please email us at info@allconnect.com.

For this report, we gathered data on 29,399 locations in the U.S. For each one, we used data from the FCC and U.S. census to determine the estimated area covered by an internet provider, the minimum price available to subscribers, the average download speeds that residents receive and the number of providers that are available.

To calculate our connectivity scores, we assigned separate scores to each of those four factors. We gave 30% weight to area covered, minimum price and average speed, and 10% to the number of providers. This showed us the best combination of availability, affordability and performance.

Pricing detailed in this report varies by location and availability. All prices subject to change at any time. May or may not be available based on service address. As of 06/02/20.