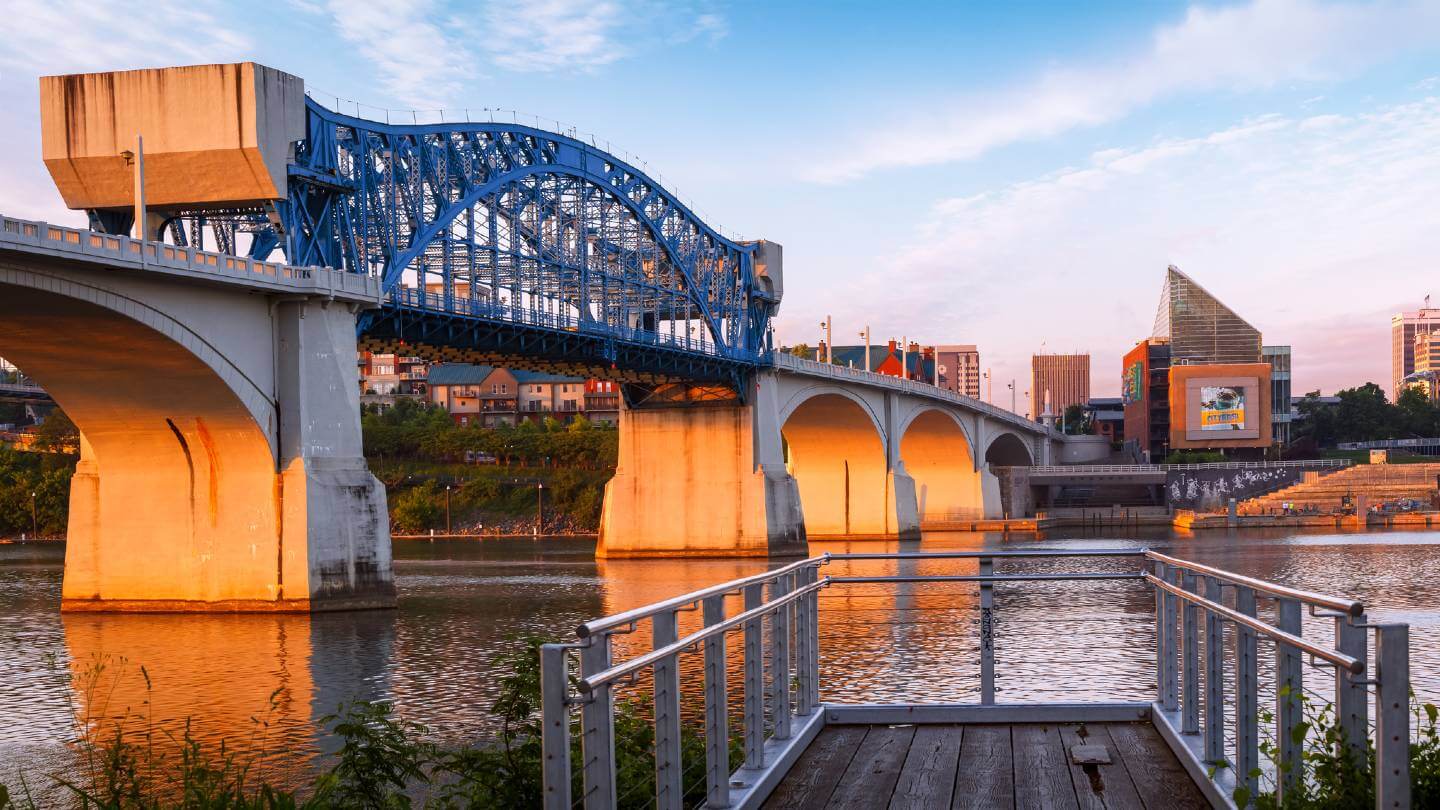 The residents of Chattanooga, TN, enjoy broadband speeds exceeding 1 Gig. That is nearly 10x faster than what the average American currently has access to or can afford. And it’s not just some residents in Chattanooga with the option to connect to gig speeds; it’s all of them.

So, what does this Tennessee city know that the rest of the country doesn’t?

In 2010, Chattanooga was the first U.S. city to become a municipally-owned internet provider that was capable of providing fiber optic internet to the entire community.

Instead of relying on outside internet providers to come in and serve select parts of Chattanooga, the city created its own local provider, EPB, in order to ensure accessibility and keep costs down.

With the COVID-19 pandemic-driven need to ensure all Americans have access to high-speed internet at an affordable rate, broadband proponents and government agencies are racing to find the solution. However, there are disagreements on how to get there and what the end result will look like.

Gary Bolton, the president and CEO of the Fiber Broadband Association, an organization that provides advocacy, education and resources to help deploy fiber optic, emphasizes this need for the U.S. to start prioritizing broadband access and speeds.

“It’s absolutely critical that this issue be treated as high priority.”

Bolton explains, “With the pandemic, we have certainly seen that broadband is no longer a luxury but a necessity for every aspect of life. Everything is connected.”

Despite already spending billions of dollars in broadband deployment, the U.S. has just scratched the surface. In order to truly solve this broadband crisis, the U.S. needs to invest in the proper infrastructure, prioritize the right solutions and lift any restrictions that prevent localities from being able to provide broadband access to their communities.

As of April 2020, only 37% of Americans believed the government had a responsibility to ensure connectivity for all.

However, what many Americans don’t realize about broadband deployment is that this expense is not charity; it’s an investment that can entirely transform a community.

Bolton explained, “You need to think about how fiber is really about jobs. Communities come to me all the time saying ‘…we’re not growing jobs because we don’t have [high-speed internet].’”

With the improvement of broadband access and speeds, Chattanooga has seen huge returns on its investment. The University of Tennessee conducted a study on the effects of Chattanooga’s public broadband infrastructure initiative and found the city made over $2.69 billion in the first decade due to its investment and created a total of 9,516 jobs in Hamilton County.

By investing in broadband infrastructure that the entire city could have access to, Chattanooga became a destination people all over the country wanted to move to. And now the city is thriving.

If you look even now, the number of people that are moving out of Silicon Valley and other high-cost areas and are looking at cities like Chattanooga, where you have high-quality of life, low-cost of living and fast internet [is quickly growing].

Bolton explained that many localities do not have the foresight to invest so much money into broadband infrastructure. He experienced this reality when he was on the Alabama broadband task force with the governor a few years ago. They were looking at getting fiber into all the schools in Huntsville, AL. However, the schools weren’t particularly interested in a several-year project to deploy fiber optic broadband. Instead, they asked if the money could be used for iPads and other Apple devices.

“Those [devices] become doorstops if you’re not able to have the broadband to connect to them,” Bolton remarked. “You might like the sexy Apple stuff but if you don’t have the infrastructure, it’s really not useful. You have to put the infrastructure in.”

Not only does the U.S. need to invest in broadband deployment, but it also needs to deploy the right type of broadband service, as broadband infrastructure options are not all created equally.

If it’s not fiber, it’s not broadband. When you think about a sustainable definition of broadband, it’s fiber.

The reason why fiber optic is the superior option, compared to cable, satellite or DSL internet, is because only fiber optic’s infrastructure will be able to evolve with society’s broadband needs, such as with the increasing definition of high-speed internet and with the emergence of 5G home internet.

The federal government plans to pay Elon Musk’s low-orbit satellite company, Starlink, nearly $900 million to provide internet access to rural areas in the United States. Although Starlink currently reaches speeds up to 200 Mbps and may reach as high as 300 Mbps in the near future, satellite internet will never be able to match fiber optic when it comes to speed, latency, cost or reliability.

Bolton explains why Starlink is not the solution for rural communities,

“If their application is approved and they actually get the $900 million, it is absolutely a waste of money. It is not on a path to fiber. What’s [satellite internet] going to do for 5G? Nothing. What’s it going to do for smart-grid? Nothing. It’s a band-aid for one point in time. That point in time 10 years ago was 1 Mbps. We are subsidizing the same communities over and over and over because we are not putting the right infrastructure in place. You don’t give people poor performance or bad options because they happen to live in a rural area.”

In other words, as the requirements of broadband continue to grow (potentially all the way to 1 Terabit), any service that the U.S. invests in that isn’t fiber optic will eventually become insufficient. As a result, the government will have to start all over again and invest more money and resources into rural communities that only have access to services like Starlink.

Allconnect reached out to Starlink for a response to Bolton’s view, but did not hear back as of this article’s publish date.

Marty Newell, the chief operating officer at Rural Strategies, an organization working to expand broadband to underserved communities in rural areas throughout the U.S., however, offers a slightly different perspective than Bolton on what broadband technology must look like to solve the digital divide.

Whereas Bolton views fiber as the only possible path to universal access, Newell doesn’t believe in relying on just one solution. He explains,

“I’m not going to make bets on which technology is going to win out of all of these. I think that ten years ago, you couldn’t imagine any wireless [technology] being particularly effective and now we know that there is fixed wireless that you can’t tell the difference between most cable solutions. I think the technology will continue to make this less of an issue. I think we want to be careful not to pick winners and losers in the technology.”

“To call fiber a technology and say that we need other choices, that’s probably a misnomer,” Bolton explains.

Although the FCC seems to be aware that fiber optic is the superior service type, they are reluctant to permit fiber optic to become the sole choice in communities. For instance, Bolton interviewed an FCC commissioner in December who said that they don’t want their definition of broadband to get too fast (currently it is 25 Mbps) because then only fiber optic would qualify as broadband.

“That’s the craziest thing I have ever heard in my life,” Bolton remarked. “I’m going to have bad service so I can have more bad choices? My response to him was, as a technologist, what you’re trying to do is create innovation. When you keep raising the bar, that’s where you see innovation.”

Although it is understandable that the FCC wants to maintain whatever is left of competition among internet providers, creating choice by keeping broadband standards low is not a solution.

What the FCC is overlooking is that there can still be plenty of choice and competition even if there is only one type of broadband technology installed in a community.

“If you have a good choice, there are all kinds of options to be able to provide competition. The problem is when you have bad choices,” Bolton explained.

Bolton says that his company recently conducted a study that indicated a $70 billion investment would get fiber to 90% of America. For that reason, Fiber Broadband Association is currently requesting $100 billion from the government for broadband deployment.

“We are spending trillions on COVID relief. To not invest $100 billion to ensure that all Americans have limitless internet for the future [is a mistake].”

In addition to prioritizing the deployment of fiber optic infrastructure, the U.S. government must also remove any restrictions that prevent local governments from being able to operate as its own service provider. As of 2022, 17 states in the U.S. have some sort of restrictions in place. This means that even if communities are interested in deploying their own infrastructure and creating their own local broadband provider, they are legally prohibited from doing so.

Democrats introduced a bill in March 2021 called the Community Broadband Act. The bill has yet to be passed but if it is, it will “[remove] roadblocks for public-private partnerships and locally-owned broadband systems.”

When there aren’t good options available in a community, a municipal provider can ensure all residents have access to affordable internet, which, as seen in Chattanooga, can produce significant economic development for the community.

Either way, lifting restrictions on municipal broadband is an easy and obvious solution to allow localities to take back control of their communities.

Although not all communities have the means to create their own municipal broadband network, the option needs to be there. Without it, we are cutting off a path for communities to deploy broadband much quicker than what the FCC is capable of doing. Until we begin prioritizing the right broadband initiatives and removing all restrictions on municipal broadband, we will never truly solve the digital divide.