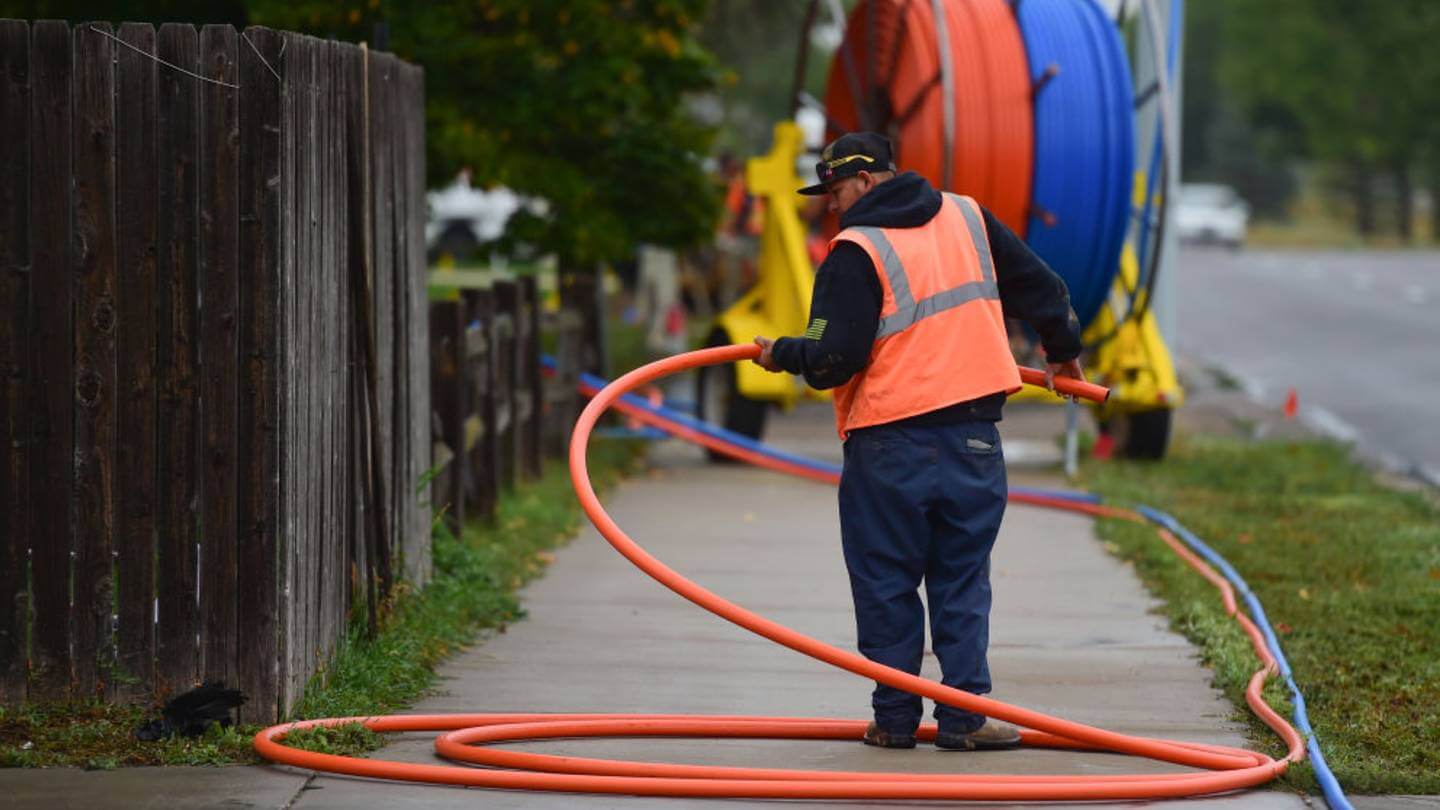 “Approximately 28.2 million of the 122.8 million households in the United States do not have high-speed broadband,” reports Education SuperHighway, a national nonprofit working to close the digital divide. “Nearly two-thirds of unconnected households have access to a home broadband connection but are offline because they cannot afford to connect.”

The two primary factors contributing to the digital divide, accessibility and affordability, are the stumbling blocks to getting everyone online in the U.S.

Most often, rural areas struggle with both of these barriers. Although there is rarely an easy solution when it comes to improving broadband services, this article will explore how residents of communities with limited or inadequate broadband services can advocate for themselves.

Marty Newell, the chief operating officer at the Center for Rural Strategies, an organization that helps strengthen rural communities and improves rural life, explained to Allconnect that there is no one-size-fits-all method for advocating for better broadband services in one’s community. That’s what makes this issue so challenging.

Chief operating officer at the Center for Rural Strategies

The federal Affordable Connectivity Program allows eligible households to get high-speed internet for free. Over 20 internet service providers, including AT&T and Verizon Fios, partner with this program by offering plans under $30/mo. With the $30/mo. program stipend, the internet service is free.

“[Although] it is a different path everywhere, it almost always starts with someone who is just so fed up with the poor service they are getting that they are going to make a stink and take it on as their life work to come up with a better solution.”

The first step, therefore, is finding someone in the community who is willing to act as a champion for the entire town. Although this may turn into a small group of advocates, the process of gaining better broadband services in one’s community normally begins with a single person who is dedicated to making a change.

The main reason the path to improving a community’s broadband service varies so drastically is that each community’s unique resources and connections play a significant role in determining a solution.

Newell explained, “It starts with surveying the lay of the land.”

“Surveying the lay of the land” can be either literal or metaphorical. The meaning can be literal for communities that already have some type of existing broadband infrastructure in place that just requires incentivizing their service provider to improve its service.

In contrast, it can be more metaphorical if a community’s primary resources have to do with their connections and ability to create partnerships with their local government, electrical co-ops, local libraries and schools, etc. in order to deploy resources that the community doesn’t currently have access to.

Newell elaborated, “There is no one most-often solution. Sometimes there are state-level programs that can help with grants or loans, but you have to find the entrepreneur or the agency that is willing to pick up the expansion or deployment of broadband. At that point, you’re in the ‘I’ve got to know every possible tool in the belt on this.’ Sometimes it is incentivizing private entities to expand or service an area.”

“Sometimes it’s working with community anchors, like libraries and schools to come up with a different kind of solution, like fixed wireless, as a way to reach places where nobody can be coerced into stringing fiber or even copper wire. There are municipal solutions; there are private sector solutions; there are hybrids of private partnerships that work. There is no easy way to say ‘here is what is going to work.’”

The hardest part, therefore, is often knowing what you’re working with and what your potential options are. This has to do with determining where you can find investment money, who is willing to help you and what the laws in your state permit or restrict.

Step 3: Research what other communities have done

One of the best ways to determine what your options are is to look into other successful case studies.

Grant money and government funding: A good place to start when advocating for broadband service in your community is to determine if your state has created a rural deployment broadband fund that your county can apply for in order to receive grant money. If you live in Virginia, for instance, you might want to look into how four rural counties there received grant money from the state to deploy fiber internet into their communities.

Mississippi is also an excellent case study to look into as its lieutenant governor, Delbert Hosemann, decided to use $150 million of the $1.2 billion stimulus money the state received from the federal government to deploy broadband service in the most underserved areas of Mississippi. Therefore, if your state doesn’t yet have grant programs for broadband deployment, you can also advocate for your state governor to create one.

Municipal broadband service: A useful case study for wherever you live is Charlemont, MA. This city rejected Comcast’s $462,123 deployment proposal and instead decided to invest $1.4 million of the city’s money to create a town-owned fiber optic company that would offer more affordable high-speed internet for its residents. If your state permits municipal broadband service, this might be a good route for your community to look into.

Community investment: Rob Putnam, a resident in a low-density community in the suburbs of Raleigh, NC, is currently in the process of negotiating with AT&T to install fiber internet into his community. Mr. Putnam’s community has been able to spark interest from AT&T by agreeing to fund the infrastructure deployment and guarantee that a certain percentage of the community will sign up for AT&T once the service is installed.

Putnam explained, “It’s gotten to the point where we, as a neighborhood, are actively lobbying, negotiating for somebody to come in here. And they are certainly asking us to pay some money, with some guarantee that people will connect up.”

Alternative providers: Another good option is for communities to look for other potential providers, such as co-ops, electrical or telephone companies, or existing providers in their community or in their adjacent community. In Whitesburg, KY,  the location of Rural Strategies’ headquarters, for instance, the two providers that claimed they served the area either did not offer the FCC’s definition broadband speeds of at least 25 Mbps or just didn’t serve parts of the town at all.

As a solution, the mayor of the town spoke to a fixed wireless provider that agreed to open up a service in their town. However, once the local broadband providers discovered that a new provider would be coming in, they became more responsive to the demands of the town.

“And immediately the two existing providers found that they had the capacity to up their speeds and lower their prices. And they did this with just the threat of a wireless provider coming in, which accomplished the mayor’s purpose and accomplished our purpose in trying to get better service in our office.”

Step 4: Talk to your local government officials about solutions and contacts

Even though your local government won’t always be able to directly solve your community’s broadband service issues, they are often a good place to start as they tend to know who are the best connections for solving your issues.

Newell explained it’s important to make it clear to your government officials that you are willing to put in the work to create change instead of merely calling to complain and hand off the issue to them.

“Ask [government officials] ‘what’s going on and who is doing something about this? Who is raising a stink?’ It is usually out of their hands. That’s not something they can do much about but they will know who it is who has learned about the issue, especially if the call is not ‘I am looking to complain,’ [but instead] ‘I am looking to spend some time to figure out a solution on this to try to get us to a better place.’”

The biggest obstacle in solving broadband access issues is that the solutions are neither easy nor quick.

“Most people, they are looking for something that can happen quickly and there is almost never one of those that I can come up with,” Newell explained.

If your community needs entirely new infrastructure installed, the process of getting broadband service in the area could take years. A more immediate solution to improving broadband service, therefore, might entail an emerging technology, such as Elon Musk’s satellite internet service Starlink or 5G fixed wireless.

“I’m not going to make bets on which technology is going to win out of all of these. I think that 10 years ago, you couldn’t imagine any wireless [solution] being particularly effective and now we know that there is fixed wireless that you can’t tell the difference between most cable solutions. I think the technology will continue to make this less of an issue.” Newell added, “The other [option] is to hold out hope that these other terrestrial solutions end up working out. I think the SpaceX one has the most promise right now but it isn’t exactly cheap. But it’s cheap compared to satellite.”

So, while it may be slightly discouraging that there are no obvious solutions to expanding broadband service at the pace our society requires, there is still a lot even a single person can achieve for the community they live in and a lot of promise when it comes to emerging broadband technology.