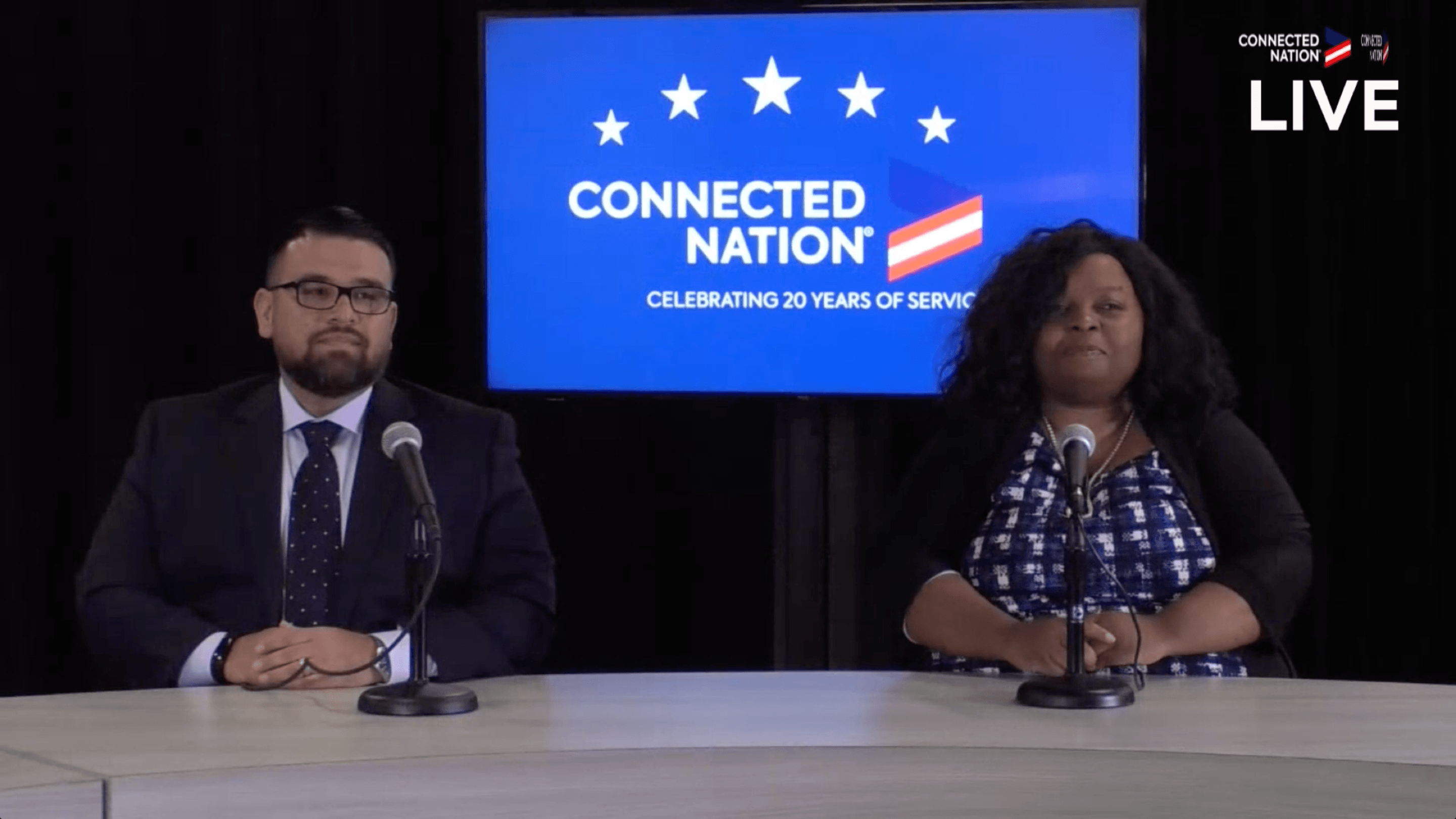 For 20 years, the national nonprofit organization Connected Nation has been working to expand internet connectivity across the U.S. To celebrate that milestone, they gathered industry insiders, broadband experts and people affected by the digital divide for a day of conversation.
The panels looked back on what they learned over the past two decades, how the pandemic has impacted the digital divide and what will come next for broadband in America.

The first panel in the conference took a big picture look at the state of broadband infrastructure in the U.S., as well as some newer technologies that could impact the industry.

Farah Ahmad, the Chief of Staff for USDA Rural Development, said that many decisions on broadband funding come down to a question of “sufficient access.” Since 2015, broadband has had a minimum definition of 25 Mbps download speed and 3 Mbps upload speed. But recently, the USDA set a minimum requirement of 100 Mbps download and 20 Mbps to receive funds to expand broadband service.

“That really widens what we define as who has quality access and who doesn’t,” said Ahmad. “It makes a much bigger part of our country open to new funding.”

Later on, the discussion turned to the state of internet connectivity across the entire globe. Daniel Gutwein, the Director of the N50 Project with Intel, said expanding internet access benefits everyone.

“We always think of it as, ‘We’ve left half the world behind.’ But I would challenge those of us who are connected to think, what are we missing from that half of the world,” said Gutwein. “We kind of owe it to ourselves to hear from the rest of the world.”

To me, the innovation comes back to who are the content providers that have a vested interest in seeing the rest of the world come online. That’s where you’re going to find the sustainability that doesn’t just connect people, but keeps them connected and enriches their lives.

Director of the N50 Project with Intel

How that gets done is another question. With so much federal funding for broadband pouring in, states will have big decisions to make about how they want to use it. But it may not require drastically different methods.

The discussion on infrastructure led into the issue of rural internet, which has often been the face of the digital divide, particularly during the COVID-19 pandemic.

“Yes, we can get it, but it’s not always reliable,” said one farmer interviewed for an introduction video. “And then you talk about the affordability of it as well. If you live in the country, it may cost you a little more to get reliable service.”

This price issue was something echoed by the panelists in the discussion that followed. According to Eddie Hopkins, the Executive Director of the Jasper Economic Development Corporation, people in his area pay four times as much for broadband as those in Dallas.

Affordability’s been our goal. If folks can’t afford it, then they feel even more inferior than they do without it.

According to a Pew Research survey of people who don’t have home internet, price was the most common reason given, with half of all respondents saying a broadband subscription is too expensive. Only 22% said broadband isn’t available at their address, or it’s only available at unacceptable speeds.

But in many rural areas, speeds simply aren’t fast enough to handle many peoples’ needs — something the COVID-19 pandemic made clear with many families working and learning from home.

“Pre-COVID, internet was a need. Post-COVID, it’s a necessity. Peoples’ livelihoods, children getting an education — people congregated around our library because it was the only building in town that had internet. So people were there at 5 am in the parking lots til 10 pm at night doing homework, pizza deliveries even going to the library and feeding people in their cars,” said David McCullough, the President and Owner of Hill Country Wireless and Technology, LLC.

That said, while there has been much progress made in the past year, the panelists agreed that it will always be a challenge to connect rural communities, particularly as bandwidth needs seem to increase every year.

“We can talk about closing the digital divide, and I think we are going to get pretty close to doing so or we might even consider it closed,” said Jennifer Harris, the State Program Director of Connected Nation Texas. “But if we stop there and act like we’re done, we’re going to create a divide again. There’s still going to be work to do to grow and change with technology.

It’s hard to close the digital divide if you don’t know where it is. Creating accurate broadband maps has been one of the biggest challenges facing the Federal Communications Commission (FCC) and other advocates. The third panel of the day focused on what’s being done to improve this process.

“We can’t identify those gaps without broadband mapping and we can’t fill those gaps either,” said Ashley Hitt, the Vice President of GeoAnalytics for ConnectedNation.

But broadband maps aren’t just useful for the government employees and industry insiders. They’re also a powerful tool for getting the public invested in the issue.

I was involved in a lot of different mapping projects over the years, but the one that got the most attention was the broadband map. Everybody cared about that. They were looking at the interactive map and scrutinizing it. And we had a method for them to report inaccuracies as well. So it was a very important public engagement tool.

Like many of the panels throughout the day, the discussion eventually turned to the infrastructure bill. Everyone agreed that mapping would be pivotal to making the broadband goals successful. Greg Guice, the Director of Government Affairs at Public Knowledge, said states should get a head start on their own maps.

“This money’s not going to be available until the FCC completes its map, but that map allows for a challenge process,” said Guice. “And if you’re a state, given the past inaccuracies of the FCC’s map and the fact that this will be a first generation map, it’s really critical that states be able to say to the FCC and the NTIA, ‘This map’s wrong. There’s no service in this area.’ Because if you miss out on this traunch of money, the next time that traunch of money’s coming is not soon.”

Broadband was important to education before the COVID-19 pandemic, but the overnight shift to remote learning put the issue under a harsh spotlight. According to one report, more than 50 million public school students were learning remotely during the pandemic, but nine million of them didn’t have the necessary device or internet connection. One solution has been to use schools and libraries as “anchor institutions” to connect communities.

“Our message to Congress has been to look at anchor institutions as a part of the solution for bringing broadband connectivity to unserved and underserved people,” John Windhausen, founder and Executive Director of the Schools, Health & Libraries Broadband (SHLB) Coalition.

“We’re very pleased that that message seems to be coming through. Because Congress has really devoted quite a bit of funding to broadband connectivity over the past year or so.”

Passed as part of the American Rescue Plan Act, the Emergency Connectivity Fund allocated over $7 billion to help schools and libraries support remote learning. That includes equipment and internet services that can be provided to students, teachers and library patrons.

The moment is now. We have the funding right now. This is unprecedented.

“We have to make sure we use data-driven solutions to fix those problems so that we don’t wake up like we did in March 2020 realizing that a significant number of students were going home not able to do homework and not able to keep up with their peers,” said Heather Gate, Vice President of Digital Inclusion for Connected Nation. “We have no excuse this time.”

What 2020 means for the future of the digital divide

The major theme of the conference was how drastically the COVID-19 pandemic impacted how we think of the digital divide. With that in mind, Connected Nation invited four experts to the stage to discuss its lasting impacts on the future of broadband in the U.S. At the top of everyone’s mind was the recently passed infrastructure bill.

“We’re at a truly historic moment in broadband policy. This is the largest single federal investment in the digital divide,” said Kathryn de Wit, Project Director of the Broadband Access Initiative with Pew Charitable Trusts. “We have funds for availability, for broadband adoption, for affordability and skills building.”

The panelists emphasized that it would be essential that we apply lessons learned about the digital divide during the pandemic to the administration of these funds.

“The digital divide is a human problem, it’s not just a technology problem,” said Angela Siefer, Executive Director of the National Digital Inclusion Alliance. “That’s what’s exciting about the progress. I think we’re finally starting to address the human side, and that isn’t lost in the infrastructure bill. So there’s a possibility that we could make a huge dent.”