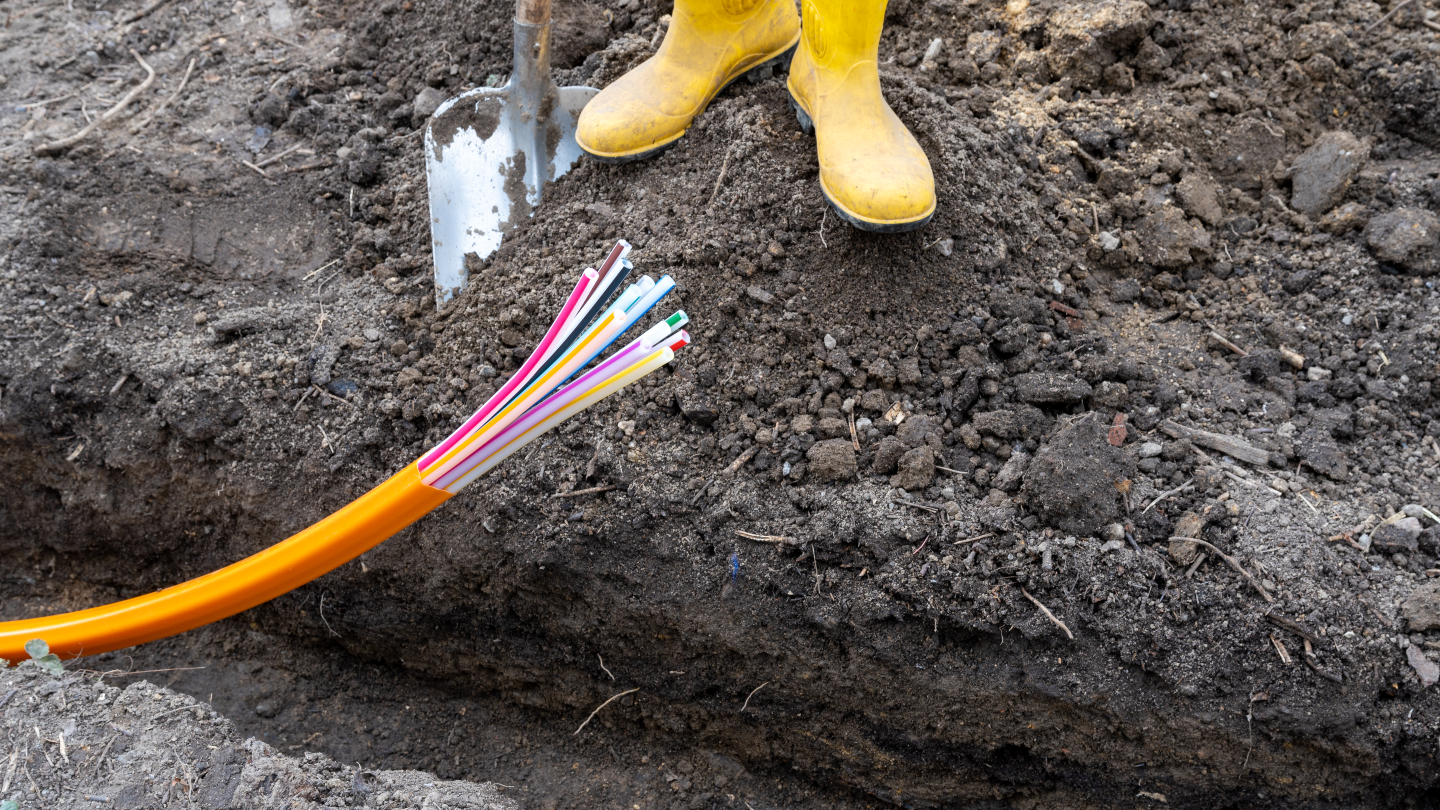 Fiber internet flows through glass fiber optic cables, which allow data to be translated via light rather than electricity and at a much faster rate than DSL or cable connections.

When you are connected to the internet, you are constantly sending data from your device and receiving data from servers that can be halfway around the world. Data moves via cables that carry that information back and forth.

In the case of fiber optics, those cables contain extremely thin strands of glass. Typically, each strand is about one-tenth as thick as a strand of human hair. A cable may contain just a couple of these strands, or several hundred of them, depending on the density of the area it is serving.

Fiber optic cables utilize a technology that was originally developed in the 1950s for endoscopes, which allowed doctors to see inside the human body without requiring invasive surgery. By the 1960s, researchers managed to utilize that technology to transmit telephone calls.

But why glass? Well, glass allows for data transmission via light — this is the “optic” part of fiber optics. In theory, this allows data to move at the speed of light, which is about 186,000 miles per second. In practice, it’s about 70% of that, but that is still much faster than other internet connections.

It’s also capable of carrying a lot of information. One strand of fiber optic can carry 25,000 telephone calls. Researchers have managed to send as much as 178 terabits of data per second across a single cable — a speed that would make it possible to download the entirety of Netflix’s library in less than a second.

While the promise of high speeds offered by fiber optic cable sounds great, it’s worth remembering that not all fiber internet is created equal, and not all fiber connections can achieve the maximum speed or transfer of data.

FTTH: Fiber to the Home

There are three primary types of fiber internet. The fastest consumer-facing fiber option is known as Fiber to the home or FTTH. This is also sometimes referred to as Fiber to the premises, shortened to FTTP. As the name suggests, this is when fiber optic cable is brought straight to your home or business, providing a direct connection to the network.

FTTC: Fiber to the Curb

Many internet providers utilize Fiber to the Curb, known as FTTC. With this option, fiber optic cables are placed across utility lines, which brings the high-speed internet solution to neighborhood blocks and communities. However, the connection from those poles to homes and other buildings is made with a coaxial cable. This shorter cable typically uses copper rather than fiber optics, so speeds are slower than the direct connection provided by fiber to the home.

FTTN: Fiber to the Node

Fiber compared to DSL and cable

Fiber internet is faster and more reliable than other internet connections. But why? It’s because of the technology that fiber cables utilize, which can transfer data faster than the alternatives.

While fiber utilizes light transferred along glass strands, a Digital Subscriber Line (DSL) uses a phone line to connect to the internet.

A DSL modem connects to a phone line via an Ethernet cord and allows for the transfer of data from your device to the internet via an existing phone line. Unlike dial-up internet, DSL does not interfere with any landline telephone services and allows the phone and internet to be used simultaneously.

DSL was an effective method of expanding internet access because of the ubiquity of phone lines, but speeds are considerably slower than more modern alternatives. DSL speeds are typically offered from between 256 Kbps to 100 Mbps.

Cable internet is considerably faster than DSL, and it is theoretically capable of providing speeds as fast as 10 Gbps. In reality, though, the speeds are much slower. Typically, cable internet providers offer speeds to consumers between 5 Mbps to 300 Mbps.

Despite the speeds made available by DSL and cable internet, fiber internet remains considerably faster. Not only is it capable of achieving much faster speeds, it can carry considerably more data.

Fiber internet achieves this thanks to the technological innovation of transferring data via light, which not only provides faster speeds but also lower latency — meaning there is less delay for data packets to transfer between one point to another.

Fiber internet is the fastest and most reliable internet connection available — although the infrastructure for true fiber connections is mostly only available in larger, metropolitan markets. Fiber internet is the backbone of much of the modern internet, and the expansion of fiber optic cables and additional infrastructure will continue to improve download speeds, connectivity, and accessibility.