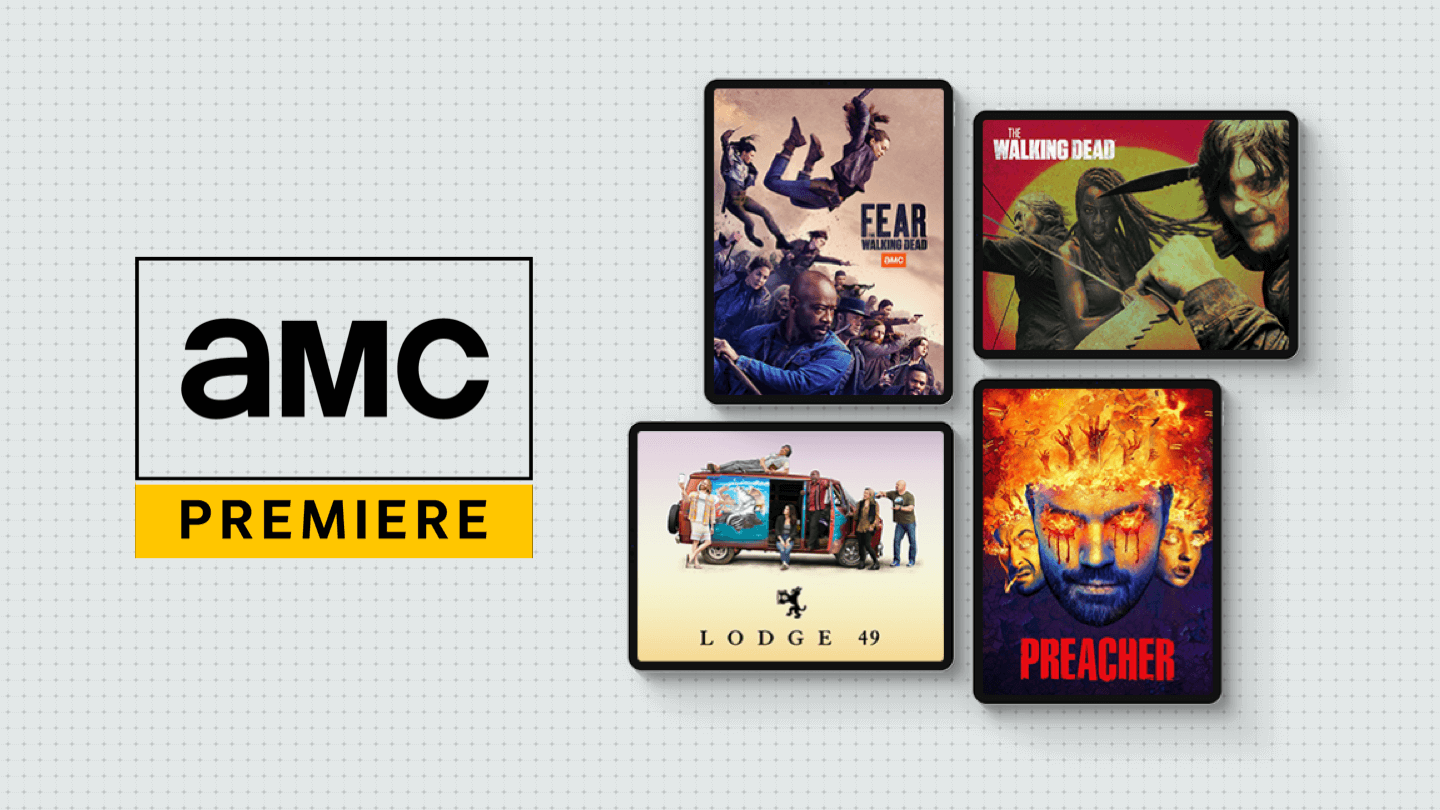 AMC Premiere is an add-on extension of the AMC network. Recently, AMC redubbed it AMC +, but the two names still seem to be used interchangeably on its website. As long as you have a subscription with a TV provider, like fuboTV or Xfinity, you’ll normally be able to get AMC Premiere for $4.99/mo. or $59.99/yr. (there is currently a $29.49/yr. offer to take advantage of!)

But since AMC Premiere isn’t a standalone streaming service, you won’t be able to purchase it on its own as you would with, say, Amazon Prime Video. In fact, like ESPN+, it doesn’t have its own app but, instead, is an extension of the regular AMC app. In addition to a number of shows from AMC, IFC, Shudder and Sundance TV, you’ll also gain a modest collection of on-demand AMC movies.

What movies does AMC have? Currently, AMC holds almost 60 movies in its collection. Movies on AMC Premiere are made up of mostly classics from as far back as the 1950s to as recently as 2014. So, you won’t really find the latest blockbusters within the ever-revolving cycle of AMC new movies. What do you do if you want the latest movies? If you’re already an AMC Stubs member, then you may want to see what we think about AMC Theatres’ latest on-demand movie app.

We don’t just feature any film on our ‘Best movies’ list. In order to find the best AMC movies, we calculated various factors such as critic reviews on IMDb, the Tomatometer score on Rotten Tomatoes and success at the box office. Even though there isn’t any ranking system on AMC Premiere, AMC’s premium app does contain featured content.

And if you’re just passing through, AMC Premiere also bestows the occasional free movie for nonmembers. Right now, you can visit AMC.com and watch the 2013 Pierce Brosnan flick, The November Man. And remember, you can watch AMC on demand but you’ll have to endure ads from time to time without an AMC Premiere subscription.

Based on the real-life crime story of Frank “Lefty” Rosenthal, Casino follows a successful mob-run Las Vegas casino. The film explores the seedy nature of the gambling underworld through the stories of a casino executive, his enforcer and socialite wife. Sharon Stone’s performance earned her an Oscar nomination for Best Actress.

In a future time where classes are separated by worlds, the poor remain in the ruins of Earth while the wealthy reside in a luxurious space station known as Elysium. One man is tasked with undergoing a life-threatening mission in order to bring equality to humanity.

A woman and her friends stay at her family’s remote cabin as she attempts to kick her drug habit. When a mysterious “Book of the Dead” is found, it unleashes demons that turn an ordinary holiday into a fight for survival. A remake of the 1981 film The Evil Dead, this version trades in the humor of the first for more blood and gore. Evil Dead won its fair share of accolades, winning awards for creature FX, special effects and its original score.

Maximus is the favorite general of philosopher-emperor, Marcus Aurelius. But after the old emperor suddenly dies, his jealous son Commodus ascends to power and takes everything from Maximus. Forced to fight as a gladiator, Maximus soon wins fame and undertakes a journey fueled by revenge. Gladiator cleaned up at the Academy Awards, winning Oscars for Best Picture, Best Actor in a Leading Role, Best Costume Design, Best Sound and Best Effects.

A decade following the events of Halloween 3, Michael Myers returns to kill his surviving niece. And as Myers leaves a trail of death and destruction, the ever-persistent Dr. Loomis attempts to track him down before it’s too late. Halloween 4: The Return of Michael Myers won a Saturn Award and was nominated by the Academy of Science Fiction, Fantasy & Horror Films for Best Horror Film and Best Writing.

In the third installment of the Mission: Impossible series, Ethan Hunt, retired from the field, now helps train the latest iteration of his agency’s task force. However, a dangerous arms dealer threatens everything Ethan holds dear, including the life of his fiance. Ethan Hunt comes out of retirement to face one of the most ruthless minds he’s ever contended with. Mission: Impossible III is one of the series’ most beloved films and won further renown by taking the ASCAP Award, California on Location Award, Empire Award and Satellite Award.

In this send-off for the Night at the Museum series, the museum watchman, Larry Daley, has been promoted to director of nighttime operations. But when Larry realizes that the magic tablet that brings the exhibits to life begins to run out, he embarks on a trip around the world to keep it alive. The movie won the highly-coveted Blimp trophy at the Kids’ Choice Awards.

Regarded as one of the top westerns ever made, The Good, the Bad and the Ugly presents a story where a mysterious stranger and a Mexican bandit team up for a bounty scam. However, their relationship is testy, leading to numerous double-crosses. When they learn about buried gold hidden in the desert, they join forces once again in order to beat out a third more vicious outlaw. Clint Eastwood won the Audience Award at the Faro Island Film Festival for his performance as the man with no name.

How to watch AMC Premiere movies

There are lots of ways to stream the AMC app, whether it’s on a TV or your smartphone. Just note that you’ll need a subscription with a TV provider that carries AMC. For example, while AT&T TV NOW, fuboTV and Sling TV include AMC, Hulu + Live TV doesn’t. Here’s a full list of the devices that support an upgrade for AMC Premiere.

AMC Premiere doesn’t have as alluring of a movie collection as Amazon Prime Video or Hulu. With AMC Premiere, you’ll get a modest collection of classic and popular movies you’d find on most TV networks — but at least they’re the full, uncut versions. For $4.99/mo., it’s an affordable pipeline to dozens of films. Like CBS All Access, AMC Premiere’s real draw is its quality of shows like Breaking Bad and Mad Men, along with BTS footage, series extras and other perks. The movies featured on AMC’s app are almost ancillary compared to its network series. So, if you’re only here for the AMC movies, then don’t get your hopes up. However, you’ll get your money’s worth by the sheer number of shows from AMC, BBC, IFC, Sundance Now and Sundance TV.