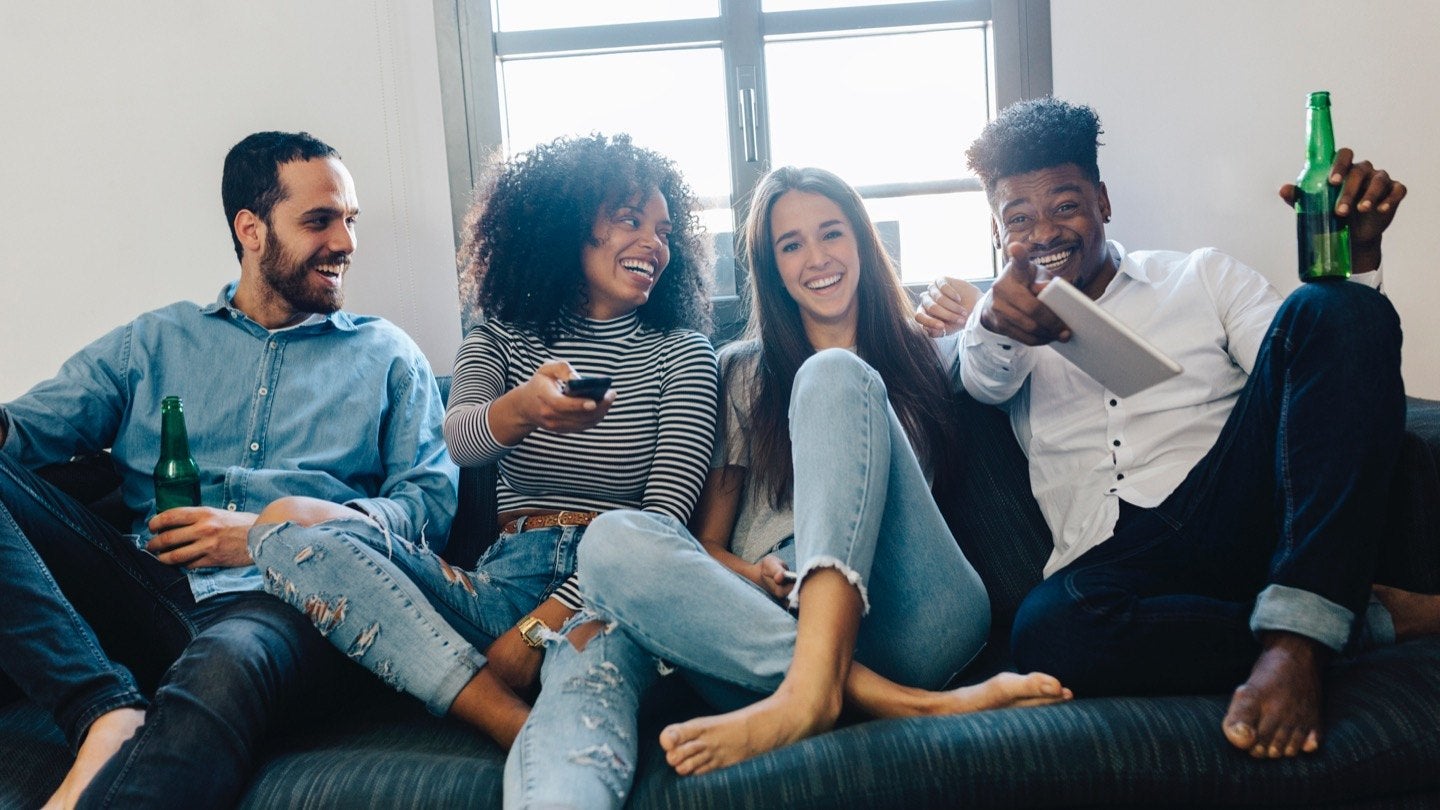 Americans now have more than 200 services to choose from, and they spend more than $100 every month on TV alone.

And with massive media companies like AT&T, Disney and Comcast launching their own services over the next year, the problem only looks to get worse.

With this glut of streaming subscriptions, some companies are swerving the other way. Free, ad-supported streaming services have never been more popular or lucrative, with $2.7 billion spent on ads in 2018 alone.

All of that is great news for viewers. There’s never been more to watch without paying a dime. In this guide, we’ll walk you through the strengths and weaknesses of eight of the most popular free Netflix alternatives.

Hoopla is as good as it gets when it comes to free Netflix alternatives, with thousands of quality movies and TV shows you’ve actually heard of. It’s owned by Midwest Tape, a company that supplies DVDs, Blu-ray discs and audiobooks around the country. The same model is applied here: You sign in using your library card and get a certain number of rentals (usually around 15) every month. And because Hoopla is operated through your library system, you won’t have to sit through any ads, either.

Great for: Just about everything. Hoopla has the most well-rounded library of any free streaming service on this list. It particularly excels in dramas, classics, documentaries, horrors and family movies. It also has a number more Oscar winners and nominees. This is one of the few free services you’ll log onto and actually recognize most of the names.

Not so great for: New releases. Overall, Hoopla doesn’t have many weak spots, but you won’t find many newer movies or TV shows on the service. That said, most free streaming services have this same issue. If you’re looking for the latest titles, you’re better off trying Kanopy first.

Unlike Hoopla, Tubi TV is entirely supported by ads. You don’t need a library card to stream and there’s no limit on how much you want to watch — you’ll just need to sit through about two minutes of commercials for every hour of video. Tubi looks to keep improving, too, as it plans to spend about $100 million in 2019 on licensed content, far more than any other free streaming site.

We also appreciated Tubi’s ultra-specific categories like “Not on Netflix” and “Highly Rated on Rotten Tomatoes.” These went a long way in helping us find something to watch, and cut down on the aimless browsing endemic to streaming services.

Great for: Just about everything. Like Hoopla, Tubi has a fantastic all-around selection, but we gave it a slight edge when it came to movies and shows for the whole family. While you’re more likely to find award-winning films on Hoopla, Tubi has a better selection of lighter content like Bowfinger and Are We There Yet?

Not so great for: As one of the free Netflix alternatives, Tubi is solid across the board, but it is lacking slightly in new releases. If you’re looking for movies that came out in the past couple of years, we recommend going to Kanopy.

Like Hoopla, Kanopy partners with your local library system to provide you access to over 4,000 movies for free. Its selection is more like the university library to Hoopla’s local branch, though, with a focus on foreign films, independent cinema and documentaries. Kanopy also has an incredible selection of educational videos on subjects like business, health and social sciences. You can even learn the basics of refrigeration and A/C repair.

Great for: Indie, foreign and classic films. Kanopy is a veritable course in film history, with a number of classics you won’t find on any other free streaming service. It also has the best collection of new releases, with recent critical darlings like Mid90s, First Reformed and Eighth Grade.

Not so great for: Comedy, action and family movies. Kanopy’s focus is decidedly “serious” movies, with few blockbusters or popcorn movies in its arsenal.

Vudu is best known as a movie rental service, but it also has more than 3,000 movies and 250 TV shows available for free. To be sure, Vudu inflates those numbers with plenty of B-movie filler (2017’s The Fast and the Fierce, anyone?), but for the most part, you’ll probably recognize most of the names in Vudu’s library.

Great for: Family movies. While Vudu also has a decent selection of horror and action flicks, it’s the best service around for kids movies. As a bonus for parents, most of them were released in the 1990-2010 range, so they can double as a nice nostalgia trip.

Not so great for: New releases, TV shows and classics. “New” for Vudu seems to end around 2010 — anything after that and you’ll have to pay to rent it — and TV shows are mostly limited to hits of yesteryear like Roseanne and 21 Jump Street.

Available on: Roku, Chromecast, Xbox One, PlayStation 3 and 4

IMDb TV (recently rebranded from IMDb Freedive) is the free streaming wing of Amazon’s subscription streaming service, Prime Video. It goes for quality over quantity, with a library that’s refreshingly free of the fluff that crowds so many free movie sites. IMDb TV only has 384 titles, but almost all of them are familiar titles with familiar actors.

Great for: Dramas, particularly from the ‘90s on. IMDb TV has a lot of quality movies from this period, and while most of them might not be your first choice for movie night, it wouldn’t be hard to find something to watch.

Not so great for: New releases, classics and documentaries.

The Roku Channel is the popular streaming device’s dedicated place for free movies and TV shows. Unfortunately, it’s only available on Roku devices and web browsers, so many people might have trouble accessing it.

Great for: The Roku Channel has a few notable movies in every genre, but it’s not particularly strong in one area. It does have a deep roster of horror and true crime shows and movies, but most of the titles are pretty obscure.

Not so great for: You won’t find many movies on the Roku Channel that are suitable for the whole family. New releases are also scarce, with almost nothing from this decade.

Founded in 2004, Sony Crackle is one of the founding fathers of free streaming services. Unfortunately, that longevity hasn’t translated into a very good product. That said, Crackle was recently purchased by Chicken Soup for the Soul Entertainment, so there is some hope that some fresh investment might rehabilitate the service.

Great for: Sony Crackle has a handful of movies you’ll recognize, but for the most part, its 364 titles are mostly B-movies and little-known sequels to better movies. That said, you can find some gems in the comedy and drama departments if you look hard enough.

Not so great for: This free service is completely devoid of new releases, classics and documentaries. It also has very little suitable for kids, so families are better off trying Vudu first.

No, we’re not talking about the unsanctioned uploads. If you strike out everywhere else, YouTube actually offers a little over 100 movies for free as a part of its movie rental business.

Great for: There’s not much YouTube’s free library is really “great for,” but it does have a surprisingly solid selection of documentaries, particularly on musicians like Taylor Swift, Beyonce and John Lennon.

Not so great for: Everything else. YouTube’s free movies are truly a last resort.

Looking for more streaming options beyond these free Netflix alternatives? Keep up with our TV and internet experts on Facebook, Twitter or right here on our resource center.