Advertiser Disclosure While this page may contain offers from our partners, our opinions are our own. Here’s how we rate providers

FiberOptic 500 – perfect for households that have heavy internet usage

Comes with the fastest speeds available at your address, so speeds and pricing will vary by location

What to expect from Frontier internet service

Frontier Internet offers DSL or fiber optic service, depending on your location. If you are looking to work from home or live stream from multiple devices frequently, you will want to choose a plan that offers at least 25 Mbps, but ideally over 100 Mbps. All of Frontier’s fiber optic plans, formerly known as Frontier FiOS, are above 25 Mbps. Although Frontier DSL does offer plans in select areas with max speeds of 115 Mbps, many areas don’t even reach 10 Mbps.

We scored Frontier internet service on a scale of 1 to 5 across four major categories. To learn more, see our methodology.

Overall, there’s a fairly significant difference between having access to Frontier FiberOptic and Frontier DSL. If Frontier FiberOptic is available to you, you will have access to better speeds (upload and download) and service. Starting prices may be slightly higher, but the value of the service will be superior.

Take a look at the benefits of Frontier FiberOptic and the 100% fiber optic network:

*per month. Taxes, govt. surcharges and one-time charges apply. Service subject to availability and all applicable terms and conditions. Speeds may not be available in all areas. 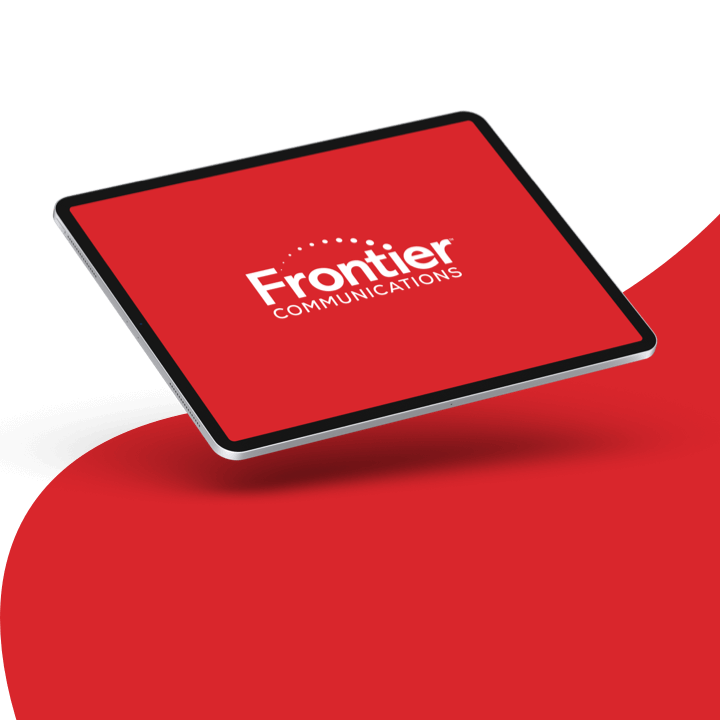 Frontier uses DSL technology to deliver an internet connection over your phone line. This helps bring affordable internet service to more areas, especially rural areas that may not have access to a quality cable or fiber optic internet connection. Plus, Frontier Internet plans come with unlimited data, a bonus you’re unlikely to find with a satellite or fixed wireless connection.

Frontier Internet service comes with the fastest speeds available at your address, so speeds and pricing will vary by location. The maximum download speed you can expect with Frontier DSL is about 75 Mbps. Depending on where you live, you could have access to one of three Frontier DSL plans:

A modem-router gateway device is included with all Frontier internet plans, which means Wi-Fi is free with Frontier. In that sense, all Frontier plans could be considered “Frontier Wi-Fi plans.”

Equipment rental is included in the price

There is no added fee for equipment as your rental is included with the price of your plan. However, after the first 12 months you can expect your bill to increase by $10/mo. for the 500 Mbps plan due to an added equipment fee charge. There will not be any price increases with Frontier’s Gig plan for three years.

Frontier equipment features a single “gateway” device which acts as your modem and Wi-Fi router in one. Necessary Wi-Fi equipment may vary by internet type and speed you choose, but you can trust Frontier to provide the right device for your connection.

No contracts, no data caps

Frontier internet plans do not require a contract, allowing you to change your plan or transfer service when you move without fear of early termination fees. Even though you are not locked into a contract, Frontier still guarantees a three-year price lock for its Gig speed plan.

There are no monthly data caps with Frontier internet, so you don’t have to worry about watching your data usage to avoid overage fees. That’s not to say Frontier internet is truly unlimited, however, as excessive data use may violate the Frontier terms and conditions.

All Frontier internet plans are subject to a one-time activation fee of $85 but if you purchase a FiberOptic plan online, you can get this fee waived.

When you enroll in autopay, you get a $5/mo. discount with any Frontier FiberOptic plan. The price listed includes this discount.

Frontier internet vs. other top providers

If you have the option to choose between Frontier and another internet service provider, there are a few things you’ll want to consider, such as starting price, speeds, data limits and contracts. Frontier FiberOptic is one of the highest ranked internet providers due to its fair pricing and download/upload speed range. If Frontier’s only service available to you is DSL, you may want to consider a different internet provider, depending on where you live.

If you’d like more in-depth comparisons of Frontier vs. other providers, click any of the links below:

Frontier is partnered with the satellite TV provider DISH, giving all customers the option to bundle Frontier internet service with TV. DISH offers four different TV packages, with a channel count that ranges between 190 and 290+ channels. Pricing for DISH TV is between $64.99/mo. and $99.99/mo., which means if you bundle Frontier internet and DISH TV together, you should expect to pay at least $115/mo.

Customer satisfaction scores among the worst of all ISPs

Frontier has some of the poorest customer satisfaction scores out of any provider. Frontier scored lowest in customer satisfaction on the 2020 ACSI, 2020 Consumer Reports and JD Power compared to all other ISPs. However, this poor rating is mostly due to its lower tier DSL products in rural or underserved areas and less due to its fiber optic service.

Will I have a data limit with my Frontier internet plan?

No. Frontier internet plans come with unlimited data so you won’t have to worry about going over a data limit, paying overage fees or dealing with reduced speeds at the end of the month.

Is Frontier internet available in my area?

What Frontier FiberOptic plan is best for me?

All Frontier FiberOptic plans come with speeds suited for streaming, online gaming and browsing the web. As you connect more devices, however, you’ll find that faster speeds will likely give you a better online experience. The 500 Mbps FiberOptic plan is sufficient for most households but if you live in a larger household with members who frequently live-game and live-stream and work from home, you may want to upgrade to the 940 Mbps plan.

Was this information on Frontier helpful?

Ari Howard is an associate writer for the Allconnect team. She researches and writes about broadband news and studies, particularly relating to internet access, digital safety, broadband-related technology and t… Read more