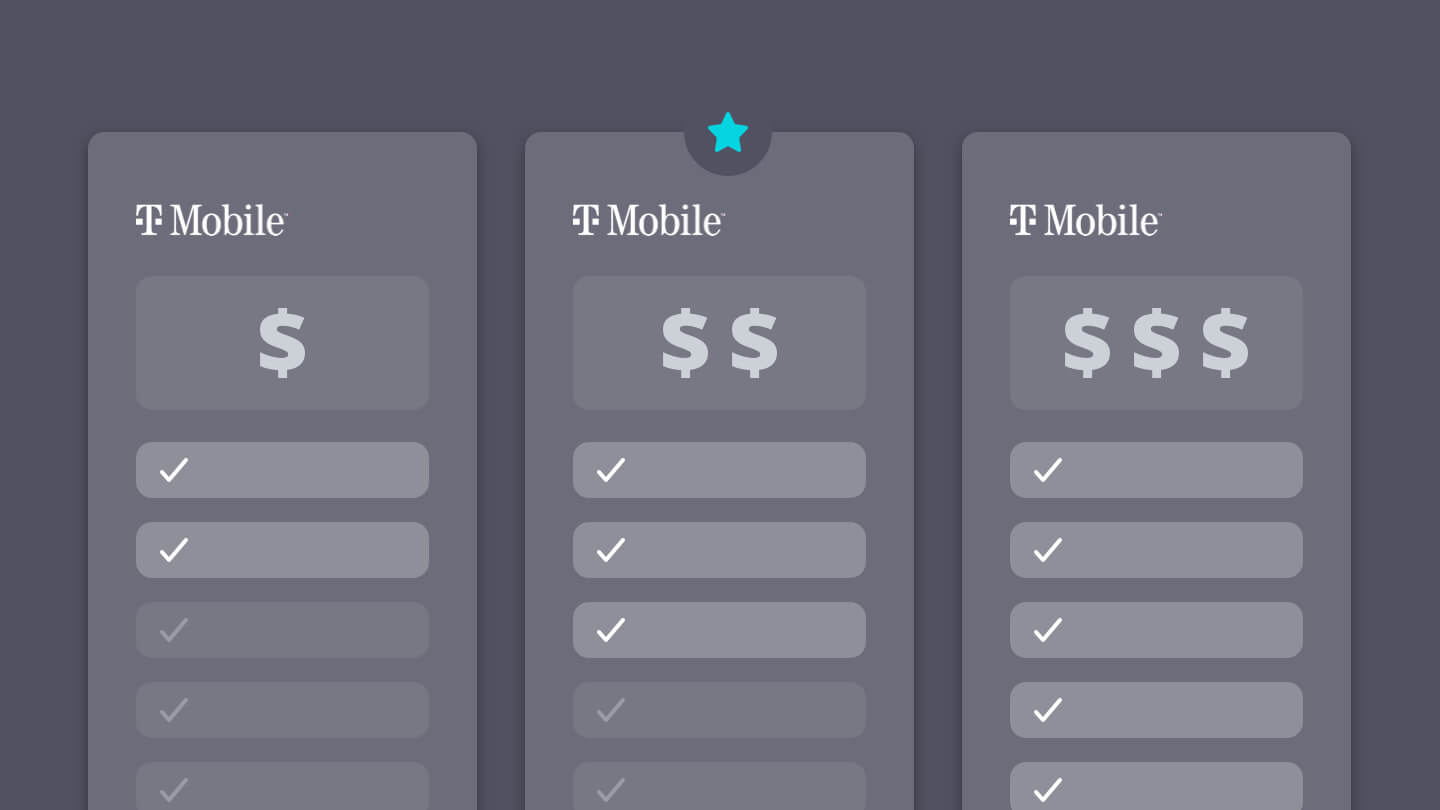 T-Mobile focuses primarily on unlimited plans, leaving the prepaid options with its Metro by T-Mobile brand. The unlimited data plans from T-Mobile are some of the cheapest out there, especially if you add three lines or more.

There are three basic tiers: Essentials, Magenta and Magenta Plus. T-Mobile also has special discounted plans for seniors over 55, military, veterans and first responders. These plans do represent excellent value.

In addition to their basic plans, T-Mobile also offers free Netflix to subscribers with two or more lines on the Magenta and Magenta Plus plans. They also offer a free third line and very generous discounts for those coming from competitors Verizon and AT&T. T-Mobile also carries a wide variety of phones, tablets and smartwatches, and will frequently run specials such as buy-one-get-one-free or 50% discounts on certain models.

T-Mobile’s plans start at $60/mo. for one line, and all of them include unlimited talk, text, data and access to its 5G network.

Pricing per line plus taxes. All plans include unlimited talk and text. Auto-pay discounts included. Additional fees and terms may apply. As of 10/14/20.

T-Mobile has three unlimited plans to choose from: Essentials, Magenta and Magenta Plus. In addition, it also offers discounted unlimited plans for seniors over 55, military/veterans and first responders, plus phone deals for customers who switch to T-Mobile from another carrier. You’ll also get a $5 discount when you enroll in autopay.

The Essentials plan is their basic offering and is the least expensive way to get T-Mobile service. One line is $60/mo., while two lines are $90/mo. Customers get unlimited talk, text and data across the U.S. as well as unlimited texting globally and unlimited 2G data in Mexico and Canada. There are charges for international calls and data. Video streaming is capped at 480p, and while unlimited mobile hotspot data is available, it’s limited to 3G speeds — typically around 3 Mbps.

The next level of service is the flagship T-Mobile Magenta unlimited plan. The price for this plan goes up a bit to $70/$120/$120/$140/mo. for one, two, three and four lines. You get everything from the Essentials plan, with some additions such as 5GB/mo. of 4G LTE data in Canada and Mexico and 3GB/mo. of 4G LTE hotspot speed per line. Another perk for travelers is one hour of Gogo in-flight Wi-Fi and unlimited in-flight texting.

While those are nice perks, they don’t compare with the addition of a free Netflix Basic or Quibi subscription (with two or more lines). Unfortunately, this Netflix Basic only streams in standard-definition. Video streaming remains capped at 480p for this plan.

The top tier of service is Magenta Plus, which gives you everything from the Magenta plan, plus a bit more. The cost is also higher at $85/$140/$140/$170/mo. for one, two, three and four lines. The plan ups your Netflix subscription to Standard (with two or more lines), which gives you access to Netflix in high-definition, and lets you stream 720p HD video through your phone.

When we reviewed the best cellphone plans for families, T-Mobile came out on top by a mile. That’s because it throws in the third line for free, no matter which plan you choose. With that free line, it’s significantly cheaper than AT&T and Verizon. But you won’t have to sacrifice coverage or perks for the lower price. T-Mobile still provides access to arguably the best network in the country, plus extras like Netflix and mobile hotspot data.

How do T-Mobile’s plans compare to other carriers?

As you can see from the table below T-Mobile has the cheapest unlimited plan. With the current promotion offering a free third line T-Mobile is by far the cheapest carrier no matter how many lines you add. Of course these are all the most basic unlimited plans, without considering any other discounts or perks.

Where T-Mobile really shines is in its special offerings for seniors, military/veterans and first responders. Those plans basically shave $15/mo. per line off the cost of the Magenta and Magenta Plus plans and are an excellent bargain for those that qualify. T-Mobile also outshines its competition when it comes to data throttling, with most competitors beginning to throttle after 20GB, while T-Mobile doesn’t throttle until usage hits 30GB. That’s a big deal.

Pricing per month plus taxes for length of contract. Includes $5 auto-pay discount. Additional fees and terms may apply. Pricing varies by location and availability. All prices subject to change at any time. May or may not be available based on service address. As of 10/15/20.

Does T-Mobile pay the early termination fees from competitors?

In many cases users who switch from AT&T or Verizon can get their early termination fees reimbursed up to $450 by T-Mobile in the form of a virtual prepaid card. This is the T-Mobile Switch and Save promotion. See https://www.switch2t-mobile.com/ for more details.

Do I have to pay more for 5G service?

T-Mobile includes 5G service in all of its unlimited plans for free. There is no extra charge. And with the largest 5G network in the U.S., they have the best coverage, with users connected to 5G roughly 20% of the time.

What if I already have a Netflix subscription?

If you already have a Netflix subscription, but still want to take advantage of the perk with your T-Mobile cellphone plan, you can transfer the billing from Netflix to T-Mobile. T-Mobile will cover up to $8.99/mo. if you have the Magenta plan, and $12.99/mo. if you have Magenta Plus.

Are taxes and fees included in T-Mobile’s plan prices?

Taxes and fees are included in the prices for the Magenta and Magenta Plus plans, but not the Essentials plan. These are significant savings to take into account. According to the Tax Foundation, a cellphone plan that costs $100/mo. will incur an additional $21.67/mo. on average in taxes, fees and surcharges.