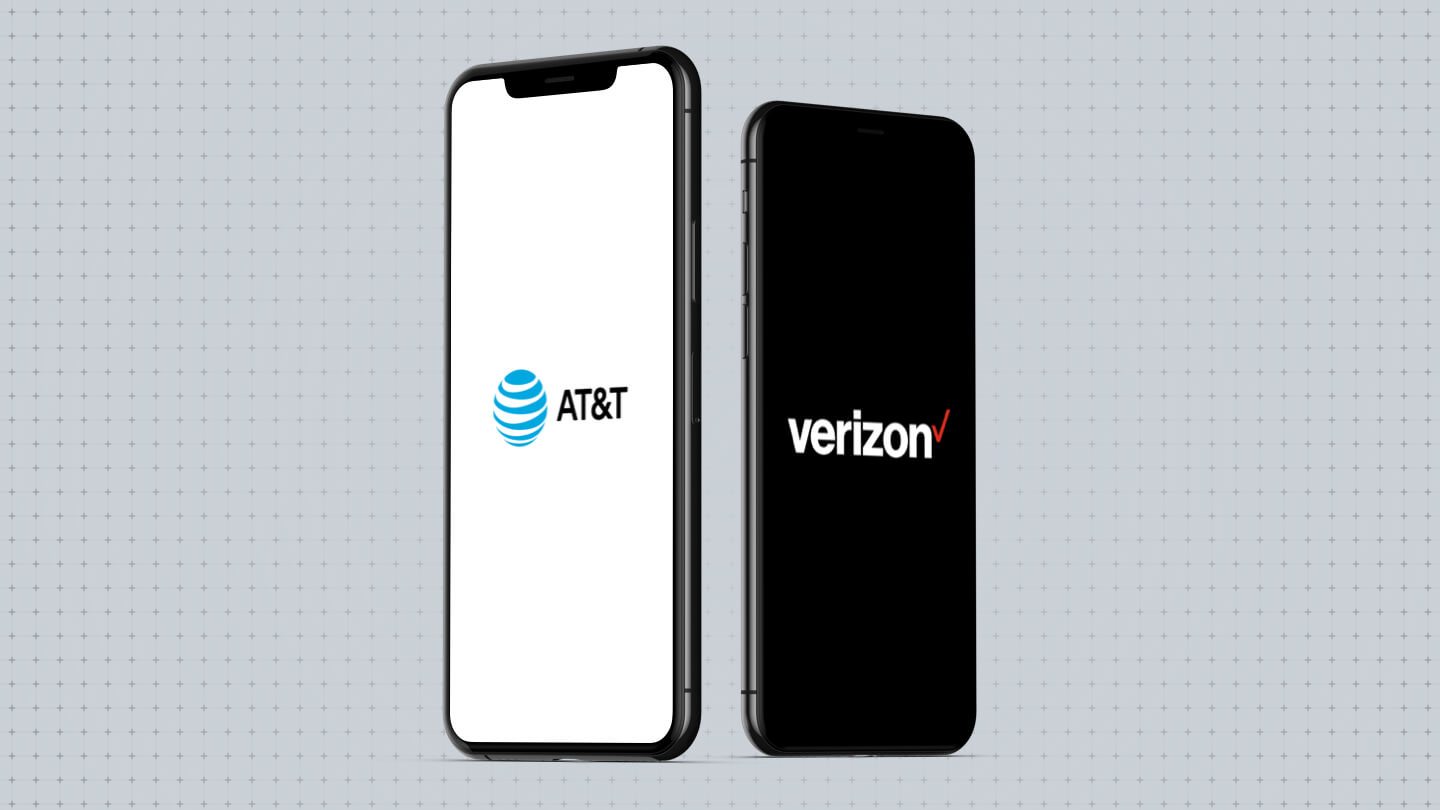 AT&T and Verizon are the two most popular cellphone companies for a reason. They both provide excellent coverage, unlimited plans and deals on the latest smartphones. The margins between them are very slim in most categories.

Put simply, if you want a more reliable network, go with Verizon. But if getting a discount on the latest smartphone is the most important factor for you, AT&T has better deals.

Both carriers also have attractive streaming promotions for new customers. All of Verizon’s unlimited plans come with subscriptions to Disney Plus and Apple Music, while AT&T includes an indefinite subscription to HBO Max — but only with its most expensive plan.

AT&T and Verizon have extremely similar wireless plans and prices, overall, ranging from $25/mo. for one line to as high as $90. Overall, Verizon gives you more options, but you’ll likely pay a little more no matter how many lines you have.

Both carriers include some tempting bonus perks to get you to sign up. HBO Max is included with AT&T’s most expensive unlimited plan ($85/mo. for one line), while Verizon throws in Apple Music and Disney Plus with all of its unlimited plans.

Because the price difference between the two is pretty minimal — just $3/mo. per line in most cases — we gave the edge to Verizon for this category. Even though it’s a little more expensive, its Apple Music and Disney Plus subscriptions close the gap, and you’ll get them no matter what unlimited plan you go with.

At first glance, the cheapest unlimited plans from AT&T and Verizon are as maddeningly similar as their names. Their features are identical — no 5G access, no unthrottled data allotments and no mobile hotspots. Where they diverge is in price and sign-up perks.

Verizon costs $5 more per month, but it more than makes up for that difference with its perks. You’ll get six months of Apple Music ($10/mo.) and a year of Disney Plus ($7/mo.) with Verizon’s Start Unlimited plan. That’s a $144 value on its own, compared to the $60 you’d save with AT&T’s slightly cheaper plan. Granted, you might not care about Apple Music or Disney Plus, but it’s worth factoring in.

At the higher end, AT&T and Verizon’s most expensive wireless plans are also remarkably similar. You’ll get 25 GB more premium data with AT&T, meaning you’ll have more time before AT&T can start throttling your speeds each month.

After that, the main difference comes down to whether you’d have HBO Max or Apple Music and Disney Plus. Both HBO Max and Apple Music are included as long as you keep your wireless plan. It’s worth noting that each line on your Verizon account gets its own Apple Music account, while you’ll only have one Disney Plus and HBO Max subscription per account.

Like all wireless plans, prices go down significantly the more lines you add. AT&T and Verizon have very similar prices for their unlimited data plans on average. In most cases, AT&T is about $3/mo. less per line, but that difference can add up to hundreds of dollars a year for bigger families. AT&T also caps the number of lines it offers at four, while Verizon allows a maximum of 10 lines on one account, although the discounts stop at five lines.

Verizon’s unlimited plans cost $63 per line on average, compared to $59 for AT&T.

You get plenty of good deals on new phones through both AT&T and Verizon, but you’ll usually pay less with AT&T. To see how their phone deals compare, we looked at prices for 15 of the most popular smartphones available through both AT&T and Verizon, with promotions factored in. (We didn’t include trade-in promotions, as the actual value you’ll get for your phone is hard to pin down.)

Of course, you’ll usually have to check a few boxes to get discounted phones from any wireless carrier. All of these deals require you to commit to a monthly payment plan — 30 months for AT&T and 24 for Verizon — and open a new unlimited data line.

If you’re flexible about what phone you get, you can find great deals through both providers. But on the whole, AT&T will get you the latest smartphones for less than Verizon.

There are dozens of sources out there that test and analyze mobile performance, and almost all of them agree: Verizon has the edge in both coverage and speed.
Verizon has dominated every award from RootMetrics, an analytics firm that tests the quality of each network. Verizon has swept every category since 2015, with AT&T typically in second place. The carrier also took the top spot in every region of J.D. Power’s wireless network study, reporting the fewest problems of any provider. OpenSignal also found that Verizon customers have access to 4G speeds 95.9% of the time — the highest of any wireless carrier — and they also experience the fastest speeds when they’re connected.

There is one source that didn’t rate Verizon so highly. Ookla’s Speedtest Intelligence®, which uses data from the millions of people who use its speed test every day, ranked AT&T as the provider with fastest average speeds and Verizon fourth.

The good news is both AT&T and Verizon almost always score in the top two in network performance, no matter who’s doing the testing. But in most cases, Verizon has the edge when it comes to both coverage and speed.

If you want to go with a phone company that’s best positioned for the 5G future, go with Verizon. It’s the only carrier that exclusively uses the millimeter wave spectrum, which provides much faster speeds. Verizon only has 5G deployments in 35 cities so far, but it’s already lapping the competition.

That said, Verizon’s 5G coverage is currently much smaller than AT&T’s. But if you’re looking for absolutely game-changing speeds over the next few years, put your money on Verizon.

Hopefully, calling your phone company’s help line won’t be a huge part of your wireless experience, but you’ll likely have to utilize the customer service features at some point. When you do, Verizon will probably make it a little less painful.

AT&T and Verizon scored in the middle of the pack on the American Customer Satisfaction Index (ACSI), a hair behind T-Mobile but well above Sprint. Consumer Report’s 103,435 readers, meanwhile, gave Verizon a “Fair” score and AT&T “Poor.” Verizon also came out ahead in J.D. Power’s customer care score, which surveyed 12,974 customers who contacted their carrier’s customer service department within the past three months.

AT&T vs. Verizon wireless: Which one should you get?

For most people, Verizon is a slightly better option. You’ll get a more reliable network, more plans to choose from and a better customer service experience. Plus, all of its unlimited plans include free subscriptions to Apple Music and Disney Plus, whereas AT&T’s perks are limited to its most expensive plan.

That said, you’ll probably be able to get a new phone cheaper through AT&T. If coverage isn’t as important to you — if you live in a densely populated city, say — and you want to upgrade to a new smartphone when you switch, you’ll probably be happier with AT&T.