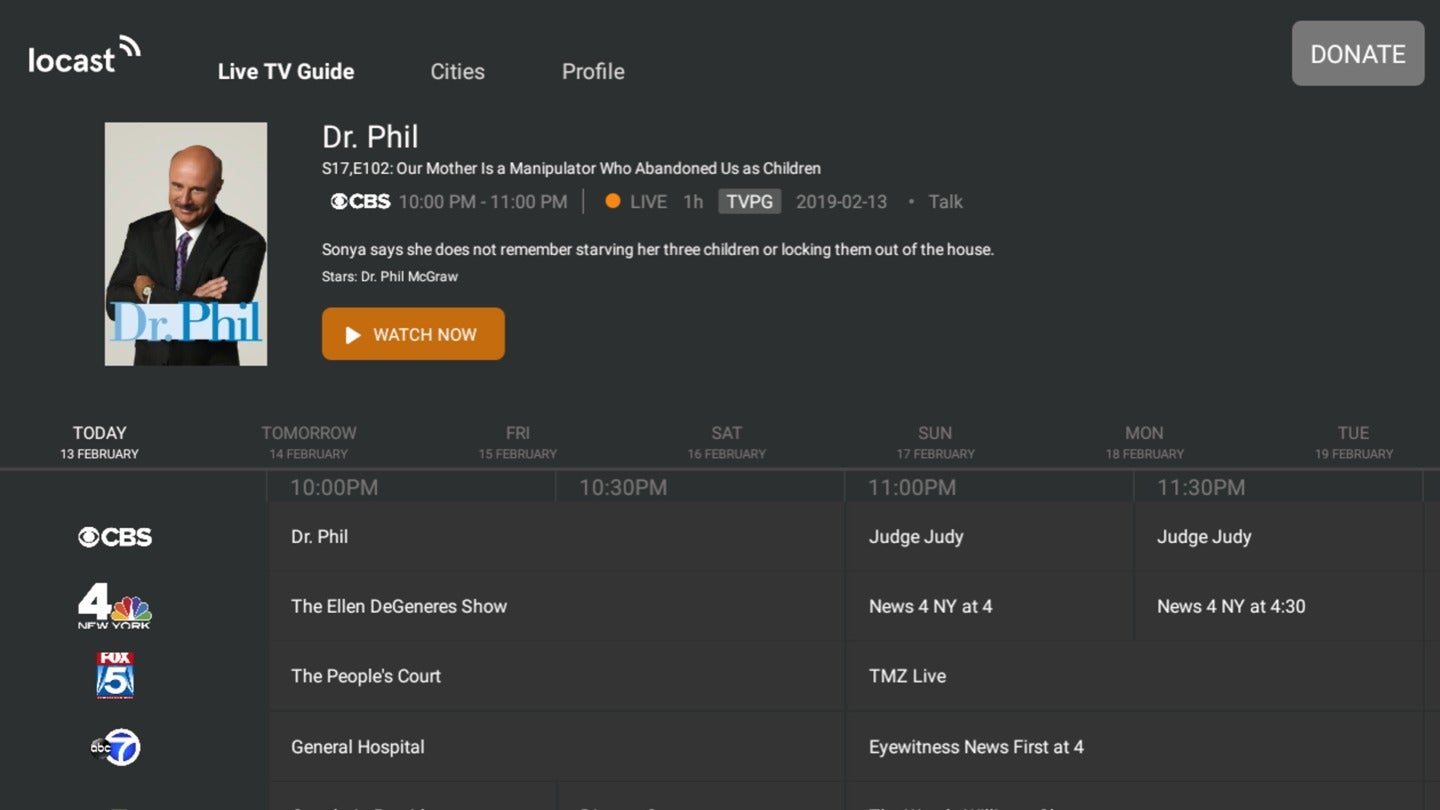 What if we told you that you could watch the Super Bowl, the Oscars and every episode of This Is Us live — all without paying a dime?

Locast is a nonprofit service that streams local TV stations like ABC, CBS, Fox, NBC, The CW and PBS through a free app.

It currently has 200,000 users in 18 U.S. markets and relies entirely on donations to keep the lights on.

Almost all of the most-watched programs on TV in 2018 (44 out of the top 50, to be exact) aired on these channels. They typically add up to around $12 of your monthly TV bill, and they’re also the ones that viewers value the most. According to a recent TiVo survey of more than 4,000 adults, ABC, CBS, Fox and NBC make up four of the eight channels consumers want most in a TV package. But under federal law, these stations must provide their signals to the public for free.

So why are we paying for them? Traditionally, viewers have only been able to take advantage of this law through a TV antenna. And while antenna use is on the rise — it’s now the highest it’s been since 2005 — it’s still a little clunky for most people. Locast has been able to bring the TV antenna loophole to the streaming era.

According to the New York Times, ABC, CBS, Fox and NBC are expected to receive more than $10 billion in fees this year from operators like Xfinity and DISH. Predictably, these networks don’t appreciate Locast giving their channels away for free, and they’ve now taken legal action.

“A rogue streaming service skirting the law for the benefit of telecom giants does nothing but threaten the very investments in content that consumers value,” the networks said in a complaint filed to the Federal District Court in Manhattan on July 31.

It promises to be a long and complicated legal battle. But for now, free TV is there for the taking for much of the country.

Right now, Locast is available in 23 U.S. markets, but it’s been adding new areas consistently over the past year. Here’s where you can get it right now:

How can I watch Locast?

Locast is currently available on a number of streaming devices and smart TVs. Here is the complete list so far:

You can also access the service through a web browser, or on iPhone and Android mobile apps.

It remains to be seen. While Locast might be operating strictly by the book, these broadcasters are betting there’s enough gray area in copyright law to shut Locast down.

Its business model is based around the premise that these channels are supposed to be free. And they are — to an extent. But for most people, TV antennas are the only way to access them without paying.

Under federal law, broadcast stations like ABC, CBS, Fox, NBC, The CW and PBS must make their signals available for free to the public. In exchange, these stations get to use American airwaves for free. However, broadcasters won a decade-long legal battle in 2000 that required TV providers like AT&T and DISH to pay for “retransmission-consent” fees to carry those signals.

So how does Locast avoid paying those fees? The Copyright Act of 1976 allows an exemption to this rule as long as the transmission is made “without any purpose of direct or indirect commercial advantage” by a “governmental body, or other nonprofit organization.”

Enter Locast. Because it’s not making money off these stations, it’s technically just a “signal booster” for channels that are supposed to be free to air under U.S. federal law.

But Locast is probably not as wide-eyed as the words “nonprofit” and “public service to Americans” would have you believe. The service has deep ties to AT&T and Dish, two of the companies that paid a large chunk of the $10 billion in retransmission fees that ABC, CBS, NBC and Fox collected this year.

AT&T donated $500,000 to Locast in June, and even directed disgruntled users to the service when it dropped CBS amid contract negotiations just a few weeks after its hefty donation.

Locast’s founder, David Goodfriend, also served as Vice President of Law and Public Policy at DISH from 2001-2008. Goodfield told the New York Times in January that DISH CEO Charlie Ergen has largely stayed out of Locast so far. “Charlie hasn’t given me any money,” he said. “Charlie just said, ‘Good luck.’ He’s been very encouraging. I’m still working on him to get some funding.”

The lawsuit from the broadcasters will essentially argue that Locast is just a way for companies like AT&T and DISH to circumvent pricey retransmission fees, violating that “indirect commercial advantage” portion of the Copyright Act. Locast maintains that it’s simply making what’s supposed to be free to the U.S. population more easily accessible.

A long, drawn-out legal battle will likely determine Locast’s fate. But for now, its free TV streaming is too good to pass up.