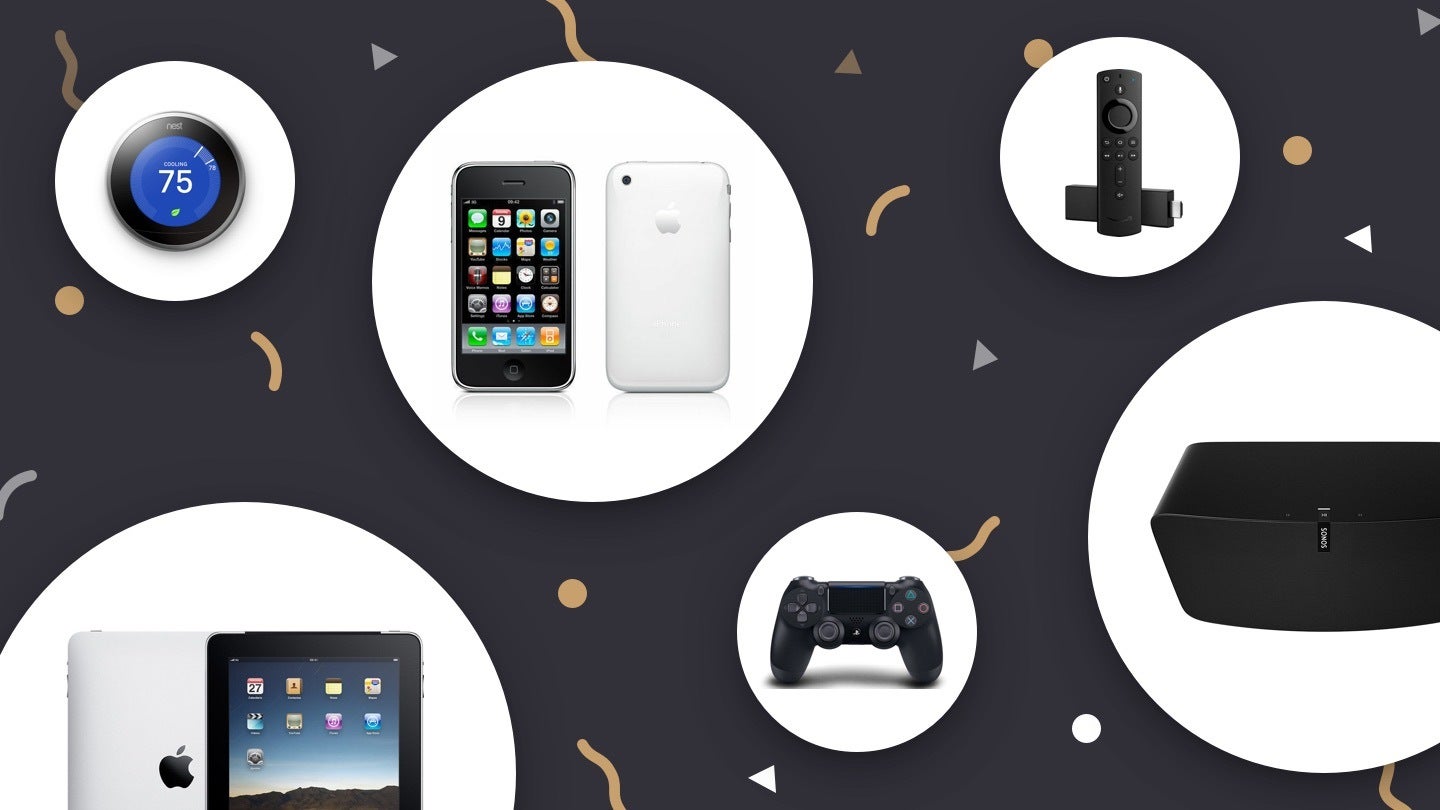 In just two short weeks, we’ll be ringing in the new year … wait, a new decade, actually! With the 2010s squarely behind us, the door for tech in 2020 is wide open — 5G, foldable phones, more 4K content, 3D printing and more.

Before we say goodbye to the 2010s, our staff wanted to reflect on their favorite technology and the devices that left a big impact.

I only play a handful of video games, so when the PlayStation 4 (PS4) came out before Christmas in 2013 at a price point of nearly $400, it was an easy pass at the time. But eventually, Sony stopped making new games for their earlier gaming console, the PS3, so if I wanted to play anything new, I had to upgrade.

In 2011, I got an iPhone 3GS for my birthday and was so excited to finally enter the smartphone era. At the time, cellphone carriers were still offering extreme discounts if you signed a contract, so I got the iPhone 3GS for only $100 (and two years of my life signed away to AT&T). The iPhone 4 was going to be released later that year, but I couldn’t bring myself to wait or pay full-price for a phone.

I was previously using the Nokia Palm Centro without data service and once I made the switch to a data-connected iPhone, I couldn’t believe I ever existed without it. I was a senior in college at the time and a few weeks away from graduating. The phone was so new and fancy, I was constantly pulling it out between classes (and even during class!) to check Facebook, Twitter, email and more.

After a few years, I retired it in favor of an iPhone 5 and have since upgraded to the iPhone 8. But, to this day, that iPhone 3GS is still one of my favorite phones (probably just behind the Motorola Razr I just had to have in high school).

I graduated from high school in 2011, so the first iPad had already been out for a year, but when I received it as a grad gift from my Dad, I was stoked. I’d never had an iPhone or MacBook so this was my first Apple product, and I remember opening my gift and being in awe of the fancy white box and sleek design of the first big tablet on the market.

I took a bulky laptop with almost zero battery life to college (which I updated later in the year to a MacBook after the Apple bug set in), and depended on my iPad for everything. I read my books, attempted to do assignments and streamed movies on it. Gripping the thing 24/7 was rough, but it was great for what I had at the time.

I’ve never purchased or needed another tablet since I, like most, rely on my smartphone for everything. But when my other devices are out of order, or I want to leave my physical books at home, I pull out my first-generation iPad and it still works perfectly.

I never thought I would get excited about a thermostat, but this little device has saved us a ton of money and reduced our carbon footprint to boot! Every month when we get our bill, the energy company includes a line graph comparing our home’s energy consumption to both an average home and an efficient home. Our home is always less than even the efficient home statistic.

The best part is we don’t have to sacrifice comfort at all, because we set the temperature to be warmer or colder for the hours we are at work, which are generally 12 hours out of the day (including our commute). We have the temperature set on an automatic timer to be appropriately set for a warmer day in the summer, and adjust for those colder temps in the winter.

My favorite thing about the Nest thermostat is the accompanying app. If I’m upstairs watching TV and decide it’s a little too chilly, I can bump the temperature up a few degrees from my smartphone. I don’t even have to get out of bed.

In 2014, as a holiday gift from my workplace, I stumbled into the world of Sonos — wireless, Wi-Fi-driven speakers — with the original Play:5. Expecting something like a Bluetooth device, I was surprised instead to hear sound quality similar to my father-in-law’s Bose Wave.

Added to that, I could stream a huge variety of app content from podcasts, to live sports and music, as well as tap into our own iTunes library. We quickly had Pandora, iHeartRadio and MLB playing throughout the house. Especially fun for us was getting to listen to live NYC sports radio, which we missed hearing once we had moved south.

Soon we got another device, then another and now we’re hooked. (One of them is from IKEA, believe it or not.) Since we made a conscious choice not to have a TV in every room of the house, Sonos has allowed us to enjoy our entertainment (synced throughout the whole house or separately) wherever we like, without being stuck in front of a flatscreen. We use it nearly every day and can keep expanding (or trade-in) with their new line of smart speakers. Next up? Maybe adding a Sonos wireless surround sound to the TV? We’ll see!

Something amazing happened the first time I heard TIDAL’s lossless audio through a decent pair of headphones. It was as if a veil had been lifted on the music I was listening to.

It’s hard to describe the unadulterated joy that comes from listening to very high quality music. Instruments you’ve never heard before appear, and it’s as if the vocalist is right in front of you. It’s incredibly compelling, to the extent you just can’t do anything else but listen. (I’ve missed subway stops and found myself still up at 3 am after falling into a rabbit hole listening to music.)

However, it is an investment in both the $19.99 Hi-Fi service and the hardware needed to listen to it (which ranges from a few hundred dollars for decent headphones to thousands and thousands for a full Hi-Fi setup). It’s also not always a great experience — the TIDAL app itself is, apart from the quality, a car crash so I’m excited for the other major players to offer lossless streaming (Apple and Spotify, I’m looking at you). If you’ve only ever listened to Spotify on your Apple earbuds, there’s a whole new world waiting for you.

I chose the Amazon Fire TV Stick because it was the first streaming device I bought, but you could easily substitute Roku or Apple TV here, too. Aside from a smartphone, this has had more of an impact on my life this decade than any other piece of tech I can think of.

In 2010, I was a freshman at college. I was constantly checking out DVDs from our college library to watch with my friends, and we quickly ran through just about everything we wanted to see. This situation seems so laughable today.

Streaming services (rightly) catch some flack for erasing film history, but they’ve worked more in the opposite direction for me. I’ve found so many incredible movies on my Fire TV Stick that I might have never even heard of otherwise.

And while I’m still incredibly grateful for my library’s DVD collection and local theaters to fill in the gaps, I love my Fire TV Stick as much as I did the day I bought it. It still feels thrilling to have that much amazing stuff within a click’s reach.

Visit us on Facebook or Twitter to let us know what’s your favorite technology from this past decade. And bookmark our Resource Center to keep up with everything happening in 2020 and beyond.