A San Francisco startup is hoping to change the way we get broadband by setting up neighborhood 5G networks.

Common Networks says its system will allow people to get 300 Mbps speeds for $49/mo.

It uses a “community network” of 5G masts to give homes high-speed access without having to install cables.

It comes as several firms, including Verizon, are set to test 5G home broadband base stations as an alternative to traditional cable. While Verizon and traditional telecommunications firms are relying on their emerging 5G networks, which are currently only available in a small number of cities, Common hopes to set up its own networks.

“At Common, we’re rethinking the problem from scratch – building a high-speed network powered by local connections,” the firm said. “We use wireless 5G hardware to connect more people at faster speeds, without lengthy construction projects or digging up yards.”

Instead, the firm puts a wireless radio antenna on the roof, with a cable into the home, which attaches to a router.

However, the company’s new 300 Mbps option is only available in the Bay Area in Alameda, Santa Clara, San Jose and Sunnyvale. The firm says it will let users download an entire HD movie in 80 seconds, stream 4K videos and connect up to 20 devices. It has developed its own software based on open 5G standards for the service.

Common is using next-generation, millimeter-wave radios and their software stack to allow for much higher throughput.

When a customer joins the network, their home wirelessly receives signals from nearby rooftop hardware. Their equipment can also relay signals to other homes, expanding coverage and access for their neighbors.

“Versus a traditional hub-and-spoke wireless network, our graph-based approach means more people can access a high-speed connection, with only a few sites needing to be directly connected to a fiber source,” Common said.

How much does it cost?

All of its pricing includes free installation and all equipment. 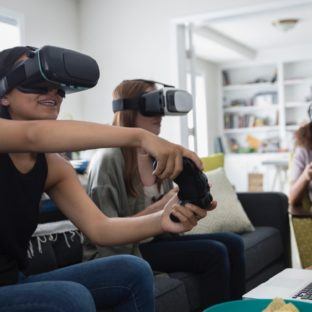