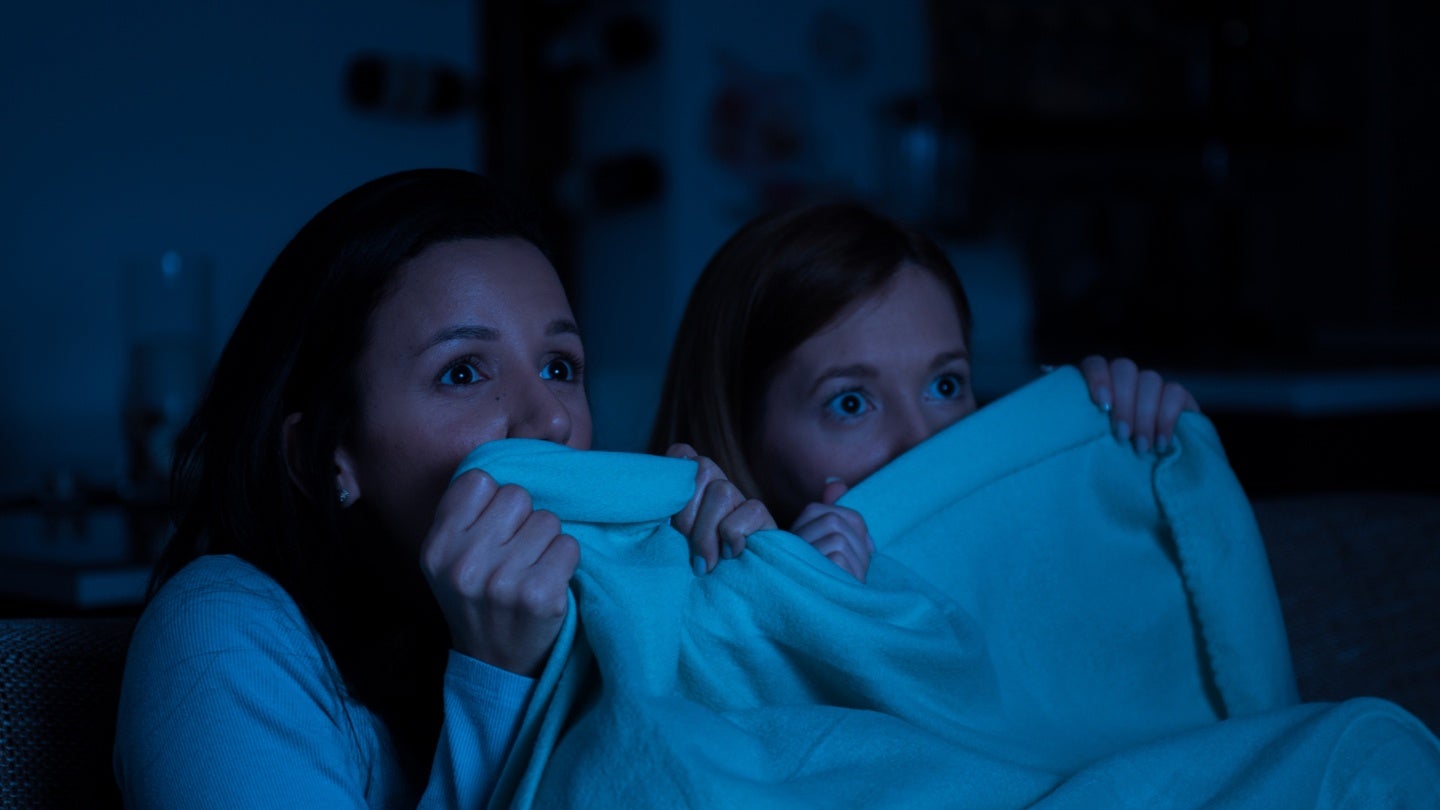 If you’re a horror fan looking to load up your queue for the ultimate holiday (Halloween duh!), then look no farther than your Netflix subscription. The streaming titan has a horror category that rivals specialist site Shudder. Start your next fright movie night with these Halloween movies on Netflix. These classic and modern films will have you wanting to leave the light on long after they’re over.

Thomas Jane stars in this Stephen King period piece about a farmer who devises a plan to kill his wife and convinces their teenage son to help. When the farmer’s wife (and hundreds of rats) begins to haunt them, the guilt from their crimes may be too much for either of them to bear.

A man discovers that his sister has been kidnapped by a cult and must travel to the utopian island they inhabit. When the man begins to dig a bit too far into the cult and the secrets of their community, he discovers his sister may be lost for good. The Wicker Man meets The Sacrament in this horror mystery.

After a zombie virus sweeps through rural Australia, a father must protect his infant daughter from the apocalypse and keep himself from becoming infected. See the full-length movie inspired by the original short film of the same name.

Who knew a haunting could be so stylish? Check out the first in the series from director James Wan inspired by real-life paranormal investigators, Ed and Lorraine Warren. Featuring one of the best exorcism scenes in modern horror, this film is a must for horror fans everywhere.

Aaron, an amateur filmmaker, comes across a Craigslist ad to film the day in the life of a dying man. But when it’s time to pay up, the man isn’t exactly ready to end his day with Aaron just yet. Find the sequel, Creep 2, on Netflix when you’re done with the original.

When Jessie and Gerald Burlingame escape to their vacation home for some much-needed alone time, Jessie soon finds herself cuffed to their bed without the key and her husband dead from an unexpected heart attack. Carla Cugino stars in this Netflix original based on the TV king novel by the same name.

Earning a whopping 90% on Rotten Tomatoes, this flick features Patrick Stewart as a neo-Nazi club owner and Anton Yelchin as the lead guitarist of a punk band. We’re already sold! Skip reviews and even the official trailer before viewing, you’ll want to save all the insane twists for your first viewing.

This home invasion flick from Oculus director Mike Flanagan may seem pretty typical until you learn writer, Maddie is not only deaf, but mute — and a worthy opponent for her masked attacker. This critically-acclaimed thriller features Kate Siegel (who also co-wrote the film with Flanagan) as Maddie.

This supernatural thriller spawned three sequels and a newfound terror for the song, “Tiptoe Through the Tulips” by Tiny Tim for audiences everywhere. See if a suburban couple can save their son when he falls asleep one night and enters another dimension.

If twist and turns, body horror and revenge tales are your thing, The Perfection is a must-watch. We don’t want to give too much away, but let’s just say you should never mess with an artistic woman.

If you loved The Blair Witch Project, you’ll love this supernatural thriller. Four guys hike their way through a Scandinavian forest in honor of their late friend. Soon, they find they aren’t alone in the woods, which is packed with pagan symbols and sacrifices.

Wes Craven’s meta take on the classic slasher film stars Neve Campbell as Sydney Prescott, the late daughter of a local woman, who may now be the new obsession of her mother’s killer. As the first installment in the series, Scream mixes horror and comedy genres to showcase and dissect typical horror troupes. If you enjoyed Cabin in the Woods, you could say Scream is where it all started.

When a couple hits a mysterious girl standing in the road, they experience more than just guilty feelings after they don’t report the accident. Find out what’s haunting Thai couple, Tun and Jane, and why you may need to pay more attention to the strange orbs that mysteriously appear in your pictures.

M. Night Shymalan’s The Sixth Sense made big movie moments meme-worthy before memes were even a thing. No horror movie night is complete without this drama/mystery with a twist ending that viewers never saw coming.

It was just last year that Spanish Netflix original, Veronica, had viewers so disturbed that many were unable to finish. Based on a true story, Veronica follows a teenage girl that attempts to communicate with her deceased father by ouija board on the night of a solar eclipse. Find out why this traditional horror tale earned top scores on Rotten Tomatoes and racked up multiple Goya nominations.

We’ve all heard of the Salem Witch Trials, but you’ve never seen the story told quite like this. Robert Eggers directs this atmospheric period piece about a New England family that are banished from their colony over religious disagreements. When the family’s youngest member, a newborn baby, goes missing, the entire family quickly descends into the paranoia of witchcraft.  But the family is just being paranoid, right?

Subscribers can find even more Halloween titles in Netflix’s brand new “Netflix & Chills” section. Ahead of the spookiest time of the year, the service is adding new horror titles and Netflix originals to round out your movie marathon.  Take a look at what you’ll find in the “Netflix & Chills” category starting Sept. 13th.