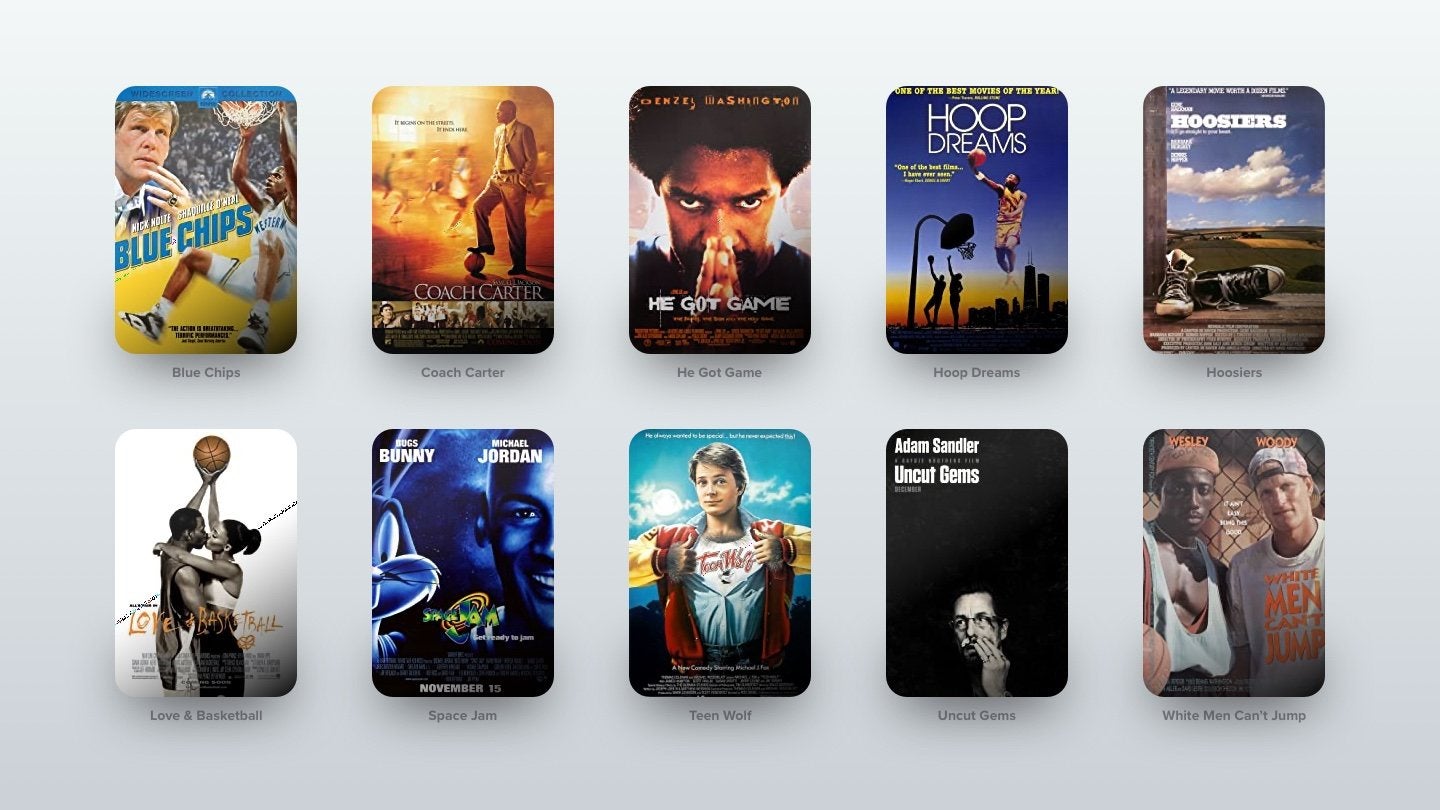 On March 11, the NBA season was abruptly cut short due to the COVID-19 pandemic. A few days later, March Madness was canceled, too. Seemingly overnight, basketball — and sports as a whole — was removed from our lives.

There’s no telling when we’ll see live games again, but if you’re jonesing for some hoops, Hollywood has made more than its fair share of basketball movies. Here are 10 of our favorites — all streaming right now.

You wouldn’t nominate Blue Chips for many acting awards (and no one did), but that doesn’t mean the movie isn’t still good 90s-sports-movie fun. Starring Nick Nolte as a college basketball coach under intense pressure to win, Blue Chips is notable for all the real players it features.  Future teammates Shaquille O’Neal and Anfernee “Penny” Hardaway are the team’s star players, and basketball royalty like Bob Knight, Larry Bird and Dick Vitale all make appearances.

What the critics said: “The movie contains a certain amount of basketball, but for once here’s a sports movie where everything doesn’t depend on who wins the big game. It’s how they win it.” – Roger Ebert, rogerebert.com

Based on the true story of Richmond, CA, high school basketball coach Ron Carter (Samuel L. Jackson), who drew attention when he suspended his undefeated team during the 1999 season for poor grades. The movie also co-stars Channing Tatum and Ashanti as high school students.

What the critics said: “Imagine Shaft with a whistle instead of a Smith & Wesson, and you’ll get an idea of how Samuel L. Jackson coolly tackles the title role in Coach Carter, a slick, fun biopic about a former hoops star who transforms a bunch of high school ne’er-do-wells from boys to men.” – Sean Daly, The Washington Post

Directed by Spike Lee and starring Denzel Washington and future basketball hall-of-famer Ray Allen, it’s hard to imagine a more high-wattage sports movie than He Got Game. The movie follows Jesus Shuttlesworth, the top-ranked high school basketball player in the country, as he navigates his relationship with his father who’s just been released from jail.

What the critics said: “This is not so much a movie about sports as about capitalism. It doesn’t end, as the formula requires, with a big game. In fact, it never creates artificial drama with game sequences, even though Ray Allen, who plays for the Milwaukee Bucks, is that rarity, an athlete who can act. It’s about the real stakes, which involve money more than final scores, and showmanship as much as athletics.” – Roger Ebert, rogerebert.com

Probably the consensus pick as the best movie ever made about basketball, Hoop Dreams is a nearly three-hour documentary that follows two high school players in Chicago as they pursue their dreams to play professionally. Despite its formidable length, the film was a huge success upon release, and even earned an Oscar nomination for Best Editing.

What the critics said: “A film like Hoop Dreams is what the movies are for. It takes us, shakes us, and makes us think in new ways about the world around us. It gives us the impression of having touched life itself.” – Roger Ebert, rogerebert.com

The movie that spawned a thousand sports movie clichés, Hoosiers stars Gene Hackman as the new coach in town with a checkered past. The Indiana high school is so small that the basketball team could only field seven players, but that doesn’t stop them from riding star Jimmy Chitwood all the way to the state championship. The movie earned Dennis Hopper an Oscar nomination for his role as an alcoholic assistant coach.

What the critics said: “What makes Hoosiers special is not its story, however, but its details and its characters. Angelo Pizzo, who wrote the original screenplay, knows small-town sports. He knows all about high school politics and how the school board and the parents’ groups always think they know more about basketball than the coach does. He knows about gossip, scandal and vengeance. And he knows a lot about human nature.” – Roger Ebert, rogerebert.com

One of the rare basketball love stories, the film tells the story of two next-door neighbors (Sanaa Lathan and Omar Epps) who grow up competing against — and eventually fall in love with — each other.

What the critics said: “It’s in the small touches that this movie comes alive, and it’s rare that directors can pull off this kind of thing. Generally they overemphasize the hackneyed plot and leave no room for fresh, airy touches that reflect a writer’s soul and a director’s understanding of actors.” – A.O. Scott, The New York Times

How you feel about Space Jam probably has a lot to do with how old you were when it came out. For those of us raised during the era when Michael Jordan was the coolest person on the planet, it’s an endlessly fun and entertaining movie.

Describing the plot makes it sound a little insane — aliens from an intergalactic amusement park come to earth to steal basketball players’ talents — but that’s missing the point. You get to watch Michael Jordan hoop with a bunch of Looney Tunes in this movie (and Bill Murray).

What the critics said: “Jordan has a natural ease and humor, an unforced charisma, that makes a good fit with the cartoon universe. By not forcing himself, by never seeming to try too hard to be funny or urgent, Jordan keeps a certain dignity; he never acts as if he thinks he’s a cartoon, too, and that’s why he has good chemistry with the Tunes.” – Roger Ebert, rogerebert.com

The movie stars Michael J. Fox, and was released just a month after his mega-hit Back to the Future. Everything you need to know is right there in the title. Fox’s Scott Howard finds himself transforming into a werewolf during his senior year, culminating in one of the great on-screen basketball games of all time.

What the critics said: “The whole thing is absolutely ridiculous — have you ever seen a wolf break dance? — and a good deal of fun.” – Rick Kogan, Chicago Tribune

While this movie is more about gambling on basketball than playing it, Uncut Gems feels like it was made with diehard hoops fans in mind. Set in 2012, jeweler and gambling addict Howard Ratner (Adam Sandler) gains possession of a rare black opal, which he trades to Kevin Garnett for his championship ring (which he then immediately wagers on Garnett’s Celtics). It’s hard to say what’s more impressive: the film’s constant sense of adrenaline or its painstaking attention to every detail of the 2012 NBA playoffs.

What the critics said: “Because Howard never stops moving, neither does the movie, and the effect is both exhausting and electrifying. Watching this latest bulletin from the Safdie brothers, Benny and Josh, is like grabbing hold of a high-voltage line: It doesn’t feel that great, but good luck letting go.” – Ty Burr, Boston Globe

Wesley Snipes and Woody Harrelson star in this buddy comedy as two basketball hustlers who capitalize off the belief that white guys can’t match up with black players. While most of the movies on this list involve basketball as played in leagues, White Men Can’t Jump is the rare ode to pick-up hoops.

What the critics said: “They’re black and white instead of fat and thin, but Wesley Snipes and Woody Harrelson have the makings of a classic comedy team, the Laurel and Hardy of the half-court game.” – Kenneth Turan, The Los Angeles Times

For more information on the best movies and TV shows to stream right now, bookmark our Resource Center and follow our experts on Facebook and Twitter.