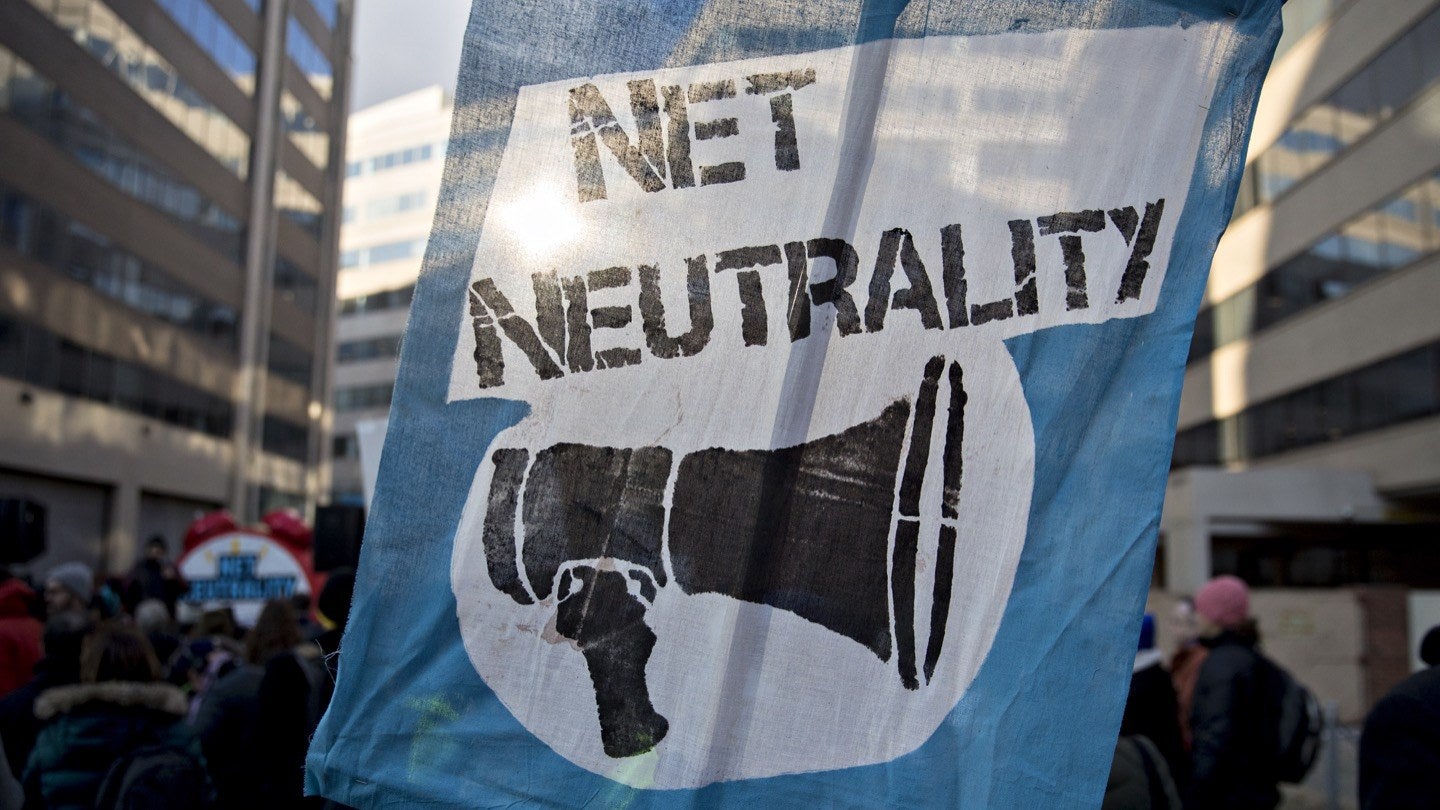 In case you’re unaware, there’s a presidential election coming in 2020. We know, it’s still 2019, but with the first primary election less than four months away, it’s a good idea to start researching candidates now.

Fortunately for you, we’ve done some of the research for you. We’ve rounded up all of the potential Democratic and Republican presidential candidates and tracked down their stances on rural internet access and net neutrality.

Before we jump into the 2020 presidential candidates, let’s do a brief review of what we’re looking at and why.

Here’s where each of the 2020 presidential candidates stands (if they’ve spoken about it):

On Biden’s official website, he outlines a plan to invest $20 billion in rural broadband infrastructure, stating that high-speed internet is essential in the 21st century.

“At a time when so many jobs and businesses could be located anywhere, high-speed internet access should be a great economic equalizer for rural America, not another economic disadvantage,” he said.

Biden stated his plan will triple Community Connect broadband grants, which help to fund broadband deployment in rural communities. As of Oct. 10, the program was not accepting applications, though.

While Biden hasn’t officially taken a stance on net neutrality, he was part of the Obama administration that pushed through the net neutrality rules. Prior to serving as vice president, he commented in 2006 that net neutrality laws weren’t necessary, and in 2007 declined to co-sponsor the Internet Freedom Preservation Act.

Since announcing his candidacy, Biden has attended a fundraiser by David Cohen, the Chief Diversity Officer (and top lobbyist) at Comcast. Many have taken this as a sign that he’s neutral to skeptical about the need for net neutrality.

While Booker’s official website doesn’t specifically outline a plan for improving rural internet, he has taken actions as a U.S. Senator to improve broadband access. In 2015, Booker, along with Sens. Edward Markey (D-MA) and Claire McCaskill (D-MO), introduced the Community Broadband Act of 2015.

At the time, Booker said: “This legislation will enhance economic development, improve access to education and health care services, and provide increased opportunity to individuals in underserved areas.” However, the bill was never enacted.

Two years later, he tried again by introducing the Community Broadband Act of 2017, this time as an amendment to the Telecommunications Act of 1996 to “ban any state, local, or tribal statute or regulation that prohibits cities from providing high-speed internet.” Again, the bill was never enacted.

When it comes to net neutrality, Booker supported Sen. Markey’s Jan. 2018 resolution to undo the FCC’s repeal vote. He’s also been vocal on Twitter about supporting an April 2019 house bill in support of net neutrality.

The mayor of South Bend, IN, turned 2020 presidential candidate has shared plans to launch an “ambitious and holistic” Internet for All initiative if elected president. Buttigieg’s plan includes $80 billion to expand access to all current unserved and underserved communities.

Specifically, his plan mentions his aspiration to “build the first network of ‘connected’ rural communities by the end of the first term to enable rural Americans to have reliable, safe and equitable infrastructure and public services.”

His Internet for All plan also includes provisions for closing the homework gap within the first term and restoring net neutrality. Additionally, Buttigieg’s plan would upgrade the public safety 911 network, speed up next-generation wireless expansion as well as foster a new generation of commercial satellite networks.

“It’s now time to use the power of the federal government to provide Internet for All,” Buttigieg said in his policy announcement. “The internet is the highway of the 21st century. Yet one in five Americans — roughly 60 million people — still lack internet access in their homes. To ensure greater opportunity for all, we must make a massive investment in internet access.”

Like Booker, Castro doesn’t mention a specific rural internet plan but instead cites his previous efforts as evidence. On his official website, he mentioned his work with the U.S. Department of Housing and Urban Development in the Obama administration working to bring low-cost, high-speed internet service to families in public housing.

As HUD Secretary, Castro worked with then-president Obama to launch ConnectHome, a pilot program to provide free or low-cost internet to residents in public-housing projects in 27 cities as well as one Indian Reservation through a network of partnerships, including CenturyLink, Cox, Google Fiber, private companies and more. The pilot program wrapped in 2017 turning into ConnectHomeUSA run by HUD’s nonprofit partner, Everyone On.

While Harris has been vocal about internet-related issues, such as data privacy, she hasn’t made any formal statements or plans related to improving rural broadband access.

When it comes to net neutrality, Harris has been more vocal. In July 2017, she submitted public comments to the FCC as Senator of California and shared her comments on Medium.

“Broadband providers must not be allowed to tilt the competitive playing field by blocking or throttling their competitors, prioritizing their own offerings or otherwise unreasonably interfering with lawful content,” Harris said in her post.

More recently on the campaign trail, Harris called the net neutrality repeal “disastrous” and promised to reverse the decision if elected president.

Klobuchar outlines her goal to connect every household to high-speed internet by 2022 on her official campaign website. Since 2018, Klobuchar has worked to bring in funding to improve rural broadband deployments or introduce bipartisan legislation to expand access in rural America.

“Broadband creates jobs, opens new economic opportunities and allows America to compete and succeed in an increasingly digital world, but roughly one in four rural Americans say access to high-speed internet is a major problem,” Klobuchar said in the post.

Klobuchar was a strong opponent to the FCC’s net neutrality repeal in Dec. 2017 stating she would continue to push for free and open internet. Since then, she’s said that if elected, she’ll work to restore net neutrality.

O’Rourke doesn’t outline a specific plan on his official website but does mention expanding access to rural broadband as part of the way he’ll create more jobs as president.

Earlier this year on the campaign trail, O’Rourke spoke a bit more about the need for improving rural broadband access, even bringing popular swiping app, Tinder, into the mix.

“In Texas, we have a problem with broadband in rural communities. You may have that in Iowa as well, where farmers and ranchers and producers literally cannot get online, where people cannot start businesses in their own town or finish their education after high school because they cannot get online,” O’Rourke said at a campaign event in Keokuk, IA.

“They can’t go to Tinder and find a date tonight, to find that special person who’s going to make the difference in their lives. I want to make sure every American has that opportunity.”

In Dec. 2017, O’Rourke also wrote a Medium post opposing the FCC’s repeal stating that net neutrality laws are “crucial to creating a level playing field online.” He re-upped his support for net neutrality in a March 2018 tweet.

As part of his Revitalizing Rural American agenda, Sanders (a former 2016 presidential candidate) outlines a plan for rural economic development that includes ensuring access to high-speed internet for every American.

“It is absurd that we do not have universal, high quality, affordable broadband access for every single American,” Sanders said in his plan.

“We need strong broadband coverage across this country if business is going to thrive, create jobs and be competitive in the national and global economies. Quality broadband is essential for health care services, education and for the day-to-day needs of rural Americans.”

Sanders is a supporter of net neutrality and opposed the FCC’s Dec. 2017 decision to repeal the policy. On the campaign trail, Sanders has said that if elected he’ll appoint FCC commissioners who will reinstate net neutrality laws.

Steyer has made no official mention of rural broadband access either on his official website or the campaign trail.

Additionally, Steyer hasn’t been as vocal as some of the other 2020 presidential candidates about net neutrality, but he did support SB 822, the California bill that restored net neutrality laws within the state.

In August, Warren unveiled an $85 billion grant program that would invest in improving broadband access in rural communities through a would-be-created federal Office of Broadband Access in the Department of Economic Development.

Warren has likened the internet accessibility problems of today to that of private electric companies in the 1930s who passed over rural communities that offered “minimal profit opportunities.”

“Just like the electric companies eighty years ago, today’s biggest internet service providers (ISPs) have left large parts of the country unserved or dramatically underserved,” she said in her plan. “This ends when I’m President. I will make sure every home in America has a fiber broadband connection at a price families can afford.”

When it comes to net neutrality, Warren has been a strong supporter. She delivered a floor speech in May 2018 urging the Senate to save net neutrality. Additionally, in August, she pledged to appoint FCC commissioners who would restore net neutrality law if elected.

As part of his Restoring Democracy, Rebuilding Trust plan, Yang briefly mentioned that he’d appoint someone to the Secretary of Transportation who would be responsible for identifying “massive infrastructure programs that can upgrade our transportation channels while simultaneously achieving other goals, such as providing broadband internet to rural areas.”

Other than that, and another June 2019 tweet, there’s been few specific mentions about improving rural broadband.

Yang has outlined a specific policy for net neutrality, though, and stated that the “repeal of net neutrality protections threatens the free internet for all Americans.” His proposed policy would focus on increasing competition, provide startups with access and infrastructure, as well as reduce the overall costs of increasing internet access.

Throughout his first term, President Donald Trump has emphasized the need to improve broadband access and accelerate wireless technology development and adoption, especially 5G technology. In 2018, he signed two executive orders aimed at improving broadband development by allowing private companies access to infrastructure and reducing the amount of government paperwork needed for permission to build.

In August, the FCC approved $4.9 billion in funding to be paid out over the next 10 years to “maintain, improve and expand” rural broadband access across the country.

When it comes to net neutrality, though, it was Trump’s appointment of the current FCC commissioners that led to the repeal of policies in Dec. 2017.

The former congressman from Illinois turned conservative talk radio host launched his campaign in late August and hasn’t made any formal policy announcements on his official website yet.

So, we don’t know his “official” thoughts on improving rural broadband access or net neutrality, but we do have a Dec. 2017 tweet that seems to imply he was in favor of the net neutrality repeal.

The former governor of Massachusetts is also challenging Trump but hasn’t made any policy announcements or outlined his issues on his official website. Nor has he made any public statements regarding rural broadband access or net neutrality.

Keep up with the latest developments on rural broadband improvements and net neutrality on our Resource Center.